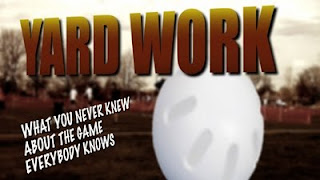 I discovered this film by happenstance. My dad was clicking through the cable stations and ran across one of the local sports stations (Fox Sports New York) running this documentary. He called me in and the two of us spent an hour completely enraptured.

Yard Work is a neat little documentary all about Wiffle Ball. Not the most exciting of subjects but I must assure you that the film has enough material to fill out its hour long running time. The film covers the origins, the physics, and the playing of the game. It also spends some time on the tournaments that spring up to play the game.

As a Wiffle Ball player in my younger days I must tell you this film knocked my socks off. I mean the things I see the balls do in this film blew me away. Balls don't just curve and sink, they go down and they go up and move in ways that seem to defy logic and reason. And then the filmmakers explain the whys and hows of the weird ball gyrations. Who needs The Discovery Channel?

The best thing about the film is that it is made in such away that it makes you feel the passion; the passion of the players, of the filmmakers, of everyone involved. Its the best sort of filmmaking. By the time it was over my dad and I were out of the living room trying to find any old balls and bats we had lying around.

And yes you really can throw a wiffle ball over 90 miles an hour.

This is currently popping up on the various sport channels as filler, and is available on DVD.
Posted by Steve Kopian at August 18, 2010