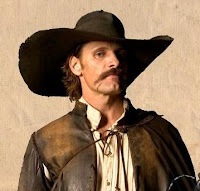 Viggo Mortensen stars as the veteran soldier and brawler in this Spanish language adaptation of all of the novels by Arturo Pérez-Revete. As the film opens Alatriste has been asked by a dying friend to raise his son when he returns from the war. Back in Madrid Alatriste begins to care for young Íñigo Balboa while trying to earn a buck as a hired sword. Quickly things are set in motion as Íñigo spies the girl who will haunt his life, and the good captain gets involved with some intrigue that will play out over the next decades.

I like what I've read of the first book and my enjoyment of that made me go out and pick up an import DVD of the film. What I had seen prior to actually watching the entire film made me think that this was the film that got the look and feel of the novel right. Now that I've seen the whole film I can honestly say that it looks and feels exactly as I had pictured it in my mind. We are in Spain and Flanders and everywhere else in the seventeenth century. This is a gorgeous film to look at.

The performances are dead on and everyone seems to inhabit their roles. Viggo is excellent as Alatriste and I can think of no one who could do it better. He's a wonder to watch in both the dramatic scenes as well as the numerous sword fights and action sequences (which are excellent)

The problem is that the script doesn't work. I mean it really doesn't work. Pulling material from several novels there is no plot as such. Things happen, people come and go, and then we're on to the next episode. I kept waiting for things to tie themselves together and they never did. There is no sustained drama, it's just incidents in the life of Alatriste. The result is what should be emotional high points and hooks just sort of lay there. The romances of Alatriste and his actress paramour (wife of a good friend) appears in fits and starts. The other romance of Inigo and Angélica skips through the tale in such a way that nothing is ever resolved, and you have no idea what they see in each other (certainly her early lines about keeping Alatriste alive to raise the boy for some grand plot comes to naught). We skip through the life and times of the Captain to no clear purpose. It might have helped had the film had the same sort of narration that the novels do (the stories are told from Inigo's point of view), since it might have been used to bridge the many "What am I missing?" moments.

Whose idea was it to do all of the books in one 140 minute movie? It was a major mistake and it makes the entire enterprise feel as though it was three days long. The movie doesn't end, it just stops. That kind of makes sense, since the movie is so bland and flat there is no way it could ever have a climax, as it never builds to anything. Some of the sequences however - like the opening attack in and out of the water - are mini masterpieces.

Okay, you're probably wondering why, if I have so many reservations, am I putting this into a film blog of lost good films? Simple, this film is technically one of the best recreations of any time period other than our own that I have ever seen. All films should be like this. They aren't, but they should be.

I'm also putting this on the blog because I love the character and Viggo Mortensen's portrayal of him. It's such a good character that I want you to go out and read the books, which are much better than this abridgement.

Although not currently out on DVD in the US, there is a chance you might still run across it, and ultimately it's good enough that I think you might want to at least get your feet wet and take a look at one of the best feeling senses-of-place ever put on film.
Posted by Steve Kopian at August 24, 2010