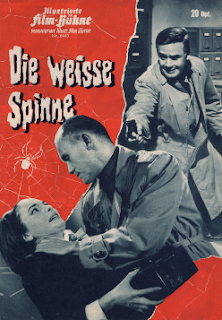 This film has been identified as one of the German series of Edgar and Bryan Wallace based films made in the 1960's. While it may have been made as part of the series, since the film plays very much like the others, it really can't be considered a Wallace film since it's not based on a book by either Bryan or Edgar Wallace.

The plot of the film centers around a woman whose husband has died in a fiery car crash outside a gambling club. Broke from her husband's gambling debts and the cost of the funeral she tries to cash in his insurance policy. The insurance company is suspicious, partly because the amount of the policy was recently raised and partly because there have been other suspicious deaths recently. Making matters worse is a lawyer who shows up on her door step wanting to be paid for covering some of her husband's debts. Unable to pay anyone the lawyer gets her a job working for a reform society that helps convicts get back into the world. The woman also attempts to confront the people in the gambling club for what she feels is the real reason for her husband's death. All of this leads her down the rabbit hole as she comes face to face with the White Spider, a gang of murder-for-hire killers. She also is hounded by the police who think she may have had something to do with her husband's demise, and a recently released convict who seems to want to do more than help.

This is a good little thriller that is a nice way to spend an evening in front of the TV. The plot moves along nicely and isn't so complicated that we can't feel superior that we're a couple of steps ahead of the characters on the screen. It's well acted (though slightly less well dubbed), and moves along at a good clip. It does have that uniquely German feel of the Wallace films which are supposed to be set in the Soho district of London, England, but look and feel nothing like Soho, or anywhere else in England for that matter.

If you like the German Wallace films this is a must. If you like neat little thrillers with a smart edge and witty dialog this is also a must. Anyone else looking for a good excuse to spend two hours eating a bag of popcorn in front of the TV should also try this movie since it's a very good mystery thriller for an evening's entertainment.

Currently out on DVD from places like Sinister Cinema
Posted by Steve Kopian at August 26, 2010