Crawling Eye (aka The Trollenberg Terror) (1958) 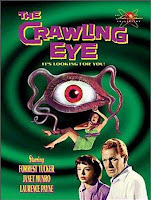 Something weird is going on at a mountain in Switzerland. There is a strange cloud that never moves, and people who go into it either die or behave strangely. Heading into the village below the mountain comes a troubleshooter, played by Forrest Tucker, and two sisters, one who has psychic abilities. It soon transpires that what's in the cloud isn't human, or even from the earth, and that the giant tentacled creatures lurking inside it want to take over.

One of the best of the 1950's sci-fi films is probably one of the most unheralded classics of the genre period. This is a masterpiece of science fiction that got it's start as a British TV production before it was bumped up to the big screen (the original production is now lost).

The film moves along at a really good pace, never pausing to give you a moment to think about what is happening. Weird things just keep happening, with the monsters kept mostly off screen until near the end (we see perhaps just a tentacle before that).

The thing that sells the film are the performances. The cast of solid British actors really put over what is happening on screen. Brought in for international sales was Tucker, who most people remember from F Troop on American TV. Tucker kind of got lost after F Troop, reduced to silly kids shows with Larry Storch and the odd TV guest shot. It's kind of sad that happened since if one looks at his film work prior to F Troop there is this really good, really solid body of work that shows him to be a strong leading man and a damn fine actor. Say what you will, it's very hard to be serious when you're making a movie about giant bug eyed blobs from space.

One of the reasons I love this film is the monsters. Huge blobs with a single eye and long tentacles, they are monsters that seem to have been dredged up from some Lovecraftian nightmare. On some level they look dumb, but at the same time they are creatures that work on you in a subconscious way. Their danger to man is stressed by several off handed remarks about their appearance elsewhere in the world.

What I like is that if you pulled out the monsters and inserted some other menace the film would still work. The monsters are ultimately just a selling point.

This is a great, great movie.

Get some friends, get some drinks and snacks and give it a go. Even if you don't become a fan odds are you'll still have a good time.
Posted by Steve Kopian at August 29, 2010