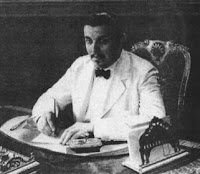 One of the few Chan movies to actually be based on one of the original novels this is essentially the start of the series of movies that many people know and love so well. The story was later shortened and reused as Charlie Chan's Murder Cruise. This was shot at the same time as an alternate to the English language version of the now lost Charlie Chan Carries On, and is an excellent take on the great detective.

The plot begins in London where a friend of Chan's, an Inspector Duff, is called in to investigate the murder of one of a travel group touring the world. It transpires that one of the group is not who they say they are and is out for revenge of a past wrong. Two more murders follow as the group continues the tour, but still there is no sign of the killer. When events in China put another member of the party in danger, Duff is forced to act and he races to Hawaii to see his old friend Charlie Chan to ask his help with the case before the party leaves. While visiting Chan in his office Duff is shot down. Chan feeling an obligation to his fallen friend tells the medics who rush Duff to the hospital to tell his friend that "Charlie Chan carries on". Chan joins the party as they board a ship for San Fransisco, vowing to either solve the murder by the time they arrive or retire if he hasn't. (The appearance of Chan is half way into the movie, and its the point at which Murder Cruise begins).

This is a really good little movie and its understandable why a series sprang from it. Even though Chan doesn't show up for a good while into the proceeding, he hangs over the film since Duff is constantly quoting things that his friend Chan might say. The mystery is tightly plotted and keeps you on the edge of your seat. Its so well done that I didn't mind not seeing Chan in action and found myself actually wishing for a series of films with Inspector Duff of Scotland Yard.

Manuel Arbó is a great Chan. A very physical actor he moves and does things that Warner Oland , and the other actor's playing Chan rarely did, he got on his knees to detect, rifles through drawers and actually does hands on investigating. Chan is also a very clearly two men. Outwardly he is the quiet font of Chinese wisdom that most people feel they can under estimate. Inwardly and when he is in the hunt he is a man of action who knows what has to be done and how to do it. Watch how he searches a room, or in the final reel sets the trap for the killer. He moves in a way that none of the other Chans ever did. He is not just a man of words, but a man of action who is very clearly in control of what is going on. Arbo is made to look physically like Oland, no doubt to use shots from the other version, however there is something more commanding about his presence. You are very aware of his presence in a scene, even when he is on the out skirts of it. I would love to have seen how the series would have played out had Arbo been allowed to play the detective. (Perhaps what makes this film so great is that it doesn't follow the the pattern of the series).

This is a movie to search out. The film is one of the bonus feature in one of the collections of Charlie Chan films. If you can get your hands on it do see it. I haven't seen the official DVD copy, having seen it on a bootleg several years ago with the English translation of the title They Were Thirteen.

I should state that even if you are not a Charlie Chan fan this is just a really good mystery, more so because it doesn't have the formula feeling that the Chan series eventually developed (As I said Chan doesn't show up for half the films running time). This is the sort of thing that people don't make any more, it feels like a movie you'll want to curl up with on a dark a stormy night.
Posted by Steve Kopian at August 12, 2010