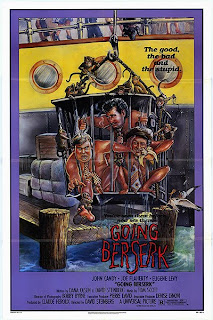 I remember going to see this movie on its brief release with my brother and some of his friends at a movie theater that is no longer in existence. It was a late show, some time around ten at night, and we went in and laughed and had a really good time with the film, becoming one we’d catch every time it was on cable.

At the same time I know people who thought it was one of the most unfunny vile vulgar unredeeming comedies ever made.

I see the vile and vulgar but not the unfunny or unredeeming (though I will admit I find it less funny than I did in my teens).

I’m trying to deduce what exactly happened to this film since it appears to have fallen off the face of the earth (Amazon has it on VHS and as an on demand film but there is no DVD).

The film stars John Candy as a nice guy chauffer who is engaged to the daughter of a senator. The senator hates his guts, but puts up with him because his daughter loves him. Candy, along with his buddy played by Joe Flaherty, gets mixed up with sleazy movie maker Eugene Levy and a murderous mind control cult run by Richard Libertini. What happens includes Candy and his friend going on the run from the law and being set up for murder. Somewhere along the way Candy ends up handcuffed to a dead man which leads to further complications and one of the first times I ever remember seeing Ernie Hudson.

This is a really good, really low brow, minor comedy by John Candy and crew that is so much better than many of his bigger budget films. Shot on-the-quick by comedian-turned-director David Steinberg this is a movie that just goes for it, taking no prisoners as it goes along. Sure it misses about the same amount as it hits but when it hits the jokes are classic, including a Leave It To Beaver spoof which still is one of the funniest I’ve seen, and a gag that makes me fearful of what any wedding videographer may do to get that tracking shot. I haven’t even mentioned the handcuff jokes which are cliché but also perfectly handled to produce laughs.

This is a film that’s way better than its non-reputation and seeming non-existence make it out to be.

I’m not going to lie, the humor is low brow and it easily earns its R rating, but at the same time it’s a funny, funny movie for those of the right age

Definitely worth a look.
Posted by Steve Kopian at August 17, 2010