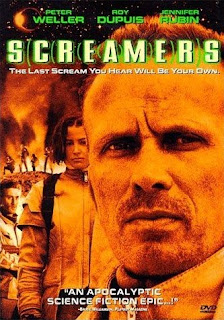 As we begin another week of random titles with an action theme I am going to take a look at another title recommended to us for inclusion.

Screamers is a small scale science fiction action horror film that's based upon a Philip K. Dick story called Second Variety. The plot of the film concerns a bunch of space "marines" who are on a planet where robotic blade-wielding assassins called "screamers" have been set loose to help wipe out the enemy. The problem is that not only have the robots begun to see all biological life as the enemy, but what were once small robots have begun to evolve into more terrible forms that aren't always detectable. The last survivors now have to struggle to find a way off the planet before they are all killed.

On some level you've seen something similar before, since the film is somewhat cliched, and the the source story has been unofficially raided over the years. However the film manages to overcome the feeling of having been there and done that thanks to a good cast, headed by Peter Weller, some nice plotting, and some really good action scenes which crank up the tension.

It's a film that recently inspired an awful sequel that took too many science fiction cliches and put them into a blender and spit them out; actually spitting is the wrong term, since it involves the wrong end of the anatomy.

I don't specifically know what it is about this film i Like, but I find it to be a minor joy. The action is good. The sense of being on another world is there. There is tension. The effects are good. It's all there, and I'm forced to ask what more could you want?

For me there is nothing like a small little film that does what it does well for its allotted running time, and then gets off. Screamers is such a film. This isn't brain surgery; it's action horror, a genre that isn't really done well since most filmmakers tend to go heavy on the action and then overdo the blood.

Forgive me, it's hard to really write about this film because it's just a neat little engine of entertainment that does what its supposed to do effortlessly. It's kind of a friendlier version of the creatures of the title.

Recommended. This is currently out on DVD so go get some popcorn and enjoy.
Posted by Steve Kopian at August 23, 2010