On Tuesday, anime director Satoshi Kon died of pancreatic cancer at age 46. While his filmography isn't extensive, the quality of what he left behind is powerful and all worth watching. 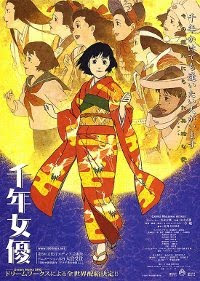 Documentary filmmaker Genya Tachibana and his cameraman Kyoji Ida meet up with legendary actress Fujiwara Chiyoko. When Chiyoko was a teenager, two things happened: she was courted by a movie studio and met a young man who was on the run from the law. These two events set the rest of Chiyoko's life's course. As the movie progresses, the filmmakers begin to find themselves interacting with scenes from both Chiyoko's life and her movies.
Millennium Actress, in some ways, feels like Satoshi Kon's most personal film. It's the only of his full-length films to not be based on any pre-existing material (while Tokyo Godfathers is his story, it's still recalling the Western The Three Godfathers). It's a love-letter to cinema -- especially Japanese cinema -- and how movies allow someone to live on after their death.
So watching it now is especially poignant.
One of the things I love about this movie how fluid the reality is. Satoshi Kon never felt the need to explain just when and where everyone was, but just let it happen. There is something of dream logic to the movie, but it's more like how one memory will lead to another. In a tragic scene from World War II, the young cameraman asks "Is this science fiction?" believing it to be a scene from one of Chiyoko's movies. Likewise, moments from Chiyoko's real life -- interactions with her husband and mother -- are interpreted as movie scenes.
As things change from moment to moment, it becomes less about what is happening and more about what it means. For Chiyoko, she's been chasing after a man for her whole life, but she understands it's more she was chasing herself. For Tachibana, it's about how he wanted to reach out to the woman he'd always admired -- and loved -- from a distance. For the audience, it's a beautiful meditation on growing older, on cinema and art, and on Japan itself.
Kon was often asked why he worked in animation when his movies could just as easily be live-action. I always thought that was a silly question. Watching his movies -- especially this one -- make it clear that animation is the perfect choice for what he was doing. It's more immediate and more personal. It allows him to jump from time to time without it being jarring, and allows the audience to get lost in what Kon is conveying.
It's impossible to know what Satoshi Kon would've done had he lived, but we can be thankful for what he has done. Even though his catalog isn't extensive, it's deep and influential for what it is. Millennium Actress seems to be the one of his films that tends to get overlooked, and undoubtedly, it's his most quiet and calm. I do find it to be his most beautiful and the one I want to revisit the most. I found myself unexpectedly crying when I watched it tonight -- not just for what could have been, but for what it is.
Satoshi Kon will be missed, but we were lucky to have what he's left behind.
Posted by Eden at August 26, 2010