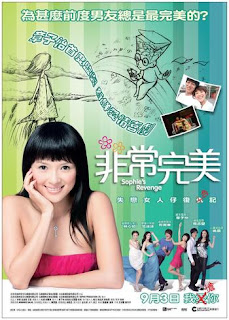 (dbborroughs first mentioned Sophie's Revenge here in a roundup of movies from this year's NYAFF. He told me I'd love it and encouraged me to write something longer about it.)

On the surface, Sophie's Revenge looks like the sort of romantic comedy you'd see in the U.S. -- you have the beautiful heroine with her fabulous clothes who works in publishing (more on that in a minute) with two wacky best friends. She's just been dumped by her fiance for a movie star. She has a meet-cute with a photographer. As she tries to win her fiance back, there are many plot contrivances that throw her and the photographer together. They, of course, fall in love. You know where all of this is going from the very beginning and nothing's really a surprise. Except for the movie itself.

What makes this different than your standard American romantic comedy is the details and how those details play out. This pan-Asian production shows exactly how you make a romantic comedy be delightful and entertaining and never insulting.

Zhang Ziyi plays the titular Sophie, a comic book artist. And quite honestly, I was sold from that point forward (Zhang Ziyi plays a comic book artist! I realize that Asia has a different approach to comics, but I love that drawing comics is seen to be a glamorous, aspirational occupation in this movie). We know she's a little off from the very beginning -- we first meet her spying on her ex-boyfriend Jeff (Ji-seob So) and his new lover, Joanna (Bingbing Fan). Deciding her next book is going to be about her attempts to win Jeff back using the "scientific method," Sophie goes forward full-force with her plan, forming an alliance with cute photographer Gordon (Peter Ho). Everyone, even her best friends, basically agree that she's crazy, but they indulge her just the same. Sophie's stunts quite often backfire and the crazy rom-com moments refreshingly have actual consequences for all the characters involved.

While Joanna is initially portrayed as a one-dimensional bitch, it quickly becomes clear that we see her that way because Sophie does. She's not necessarily a villain. Rather, she's a woman who's being pushed over the edge by the actions of a rather unstable Sophie. Still, Sophie remains likable and her motivations are understandable, even if she does take things a little far. Zhang plays her with the simmering vulnerability of a woman who knows she's better but can't help herself once she's committed to this whole thing.

Even in some of the movie's more "gross-out" moments, Sophie's never humiliated. There's never a sense of "She deserves this." Zhang handles the slapstick with her characteristic grace (and it's fun watching someone who's a trained dancer be such a klutz). The point isn't so much that Sophie falls down a lot (although she does) -- it's more that she gets right back up and keeps going.

The men in this movie are the weaker point, though. Jeff's a little dull -- we never really get know what he saw in Sophie or what she saw in him (although that's one of the points of the movie) but happily, he's not presented as a heartless jerk. Gordon, as the sensitive artist type, is clearly a better match for Sophie. It's never a question from the beginning if they'll get together (this isn't giving anything away. You've seen romantic comedies before. You know the plot) but Ho definitely brings a quiet depth to his character.

The production design is also spot-on, from the decor of the apartments (Sophie's is eclectic, which suits her occupation as an artist, and Jeff's is modern and sparse) to the clothes (Gordon is comfortable and casual, Joanna has movie-star glamor). These touches make the movie feel like it takes place in the world, despite its wackier moments and clearly contrived plot twists.

I'm told Hollywood is remaking this (although possibly with the same director) and I admit to being nervous about that since this is so wonderful. I'll keep my fingers crossed that the remake retains all the charms that this one has (but I suppose Sophie staying a comic book artist is probably too much to hope for).