For a brief instant Sapper's urbane hero Captain Hugh Drummond was all over the place. From 1929's Oscar nominated BULLDOG DRUMMOND the end of the 1930's there were 14 films with the character made in the US and in England.  Ronald Coleman starred in two (getting an Oscar nomination for his efforts), Ray Milland took a stab as did John Lodge and Sir Ralph Richardson (who also played the villain in ALIAS BULLDOG DRUMMOND)

Drummond was a bored World War One vet who found himself always getting into trouble of one sort or another- perfect for the movies. The character seemed to sit out the Second World War but then was brought back in films with Tom Conway, Walter Pidgeon and others trying to make a go. None of them did, not even an attempt in the 1960's to make him a James Bond like spy.

The interesting thing is that in 1937 there were four films with the character two (well three) of which were with one of the great unheralded film series of all time. To be certain the films aren't great mysteries but they are entertaining and exciting thrillers centered around good people. They were also more consistent than pretty much any other series running at the time even things like Charlie Chan, Doctor Kildare or Andy Hardy. I don't think there is a bad one in the lot and all leave you wanting to see another one.

1937 saw John Lodge play Drummond in BULLDOG DRUMMOND AT BAY a good spy related thriller.  The role was then taken over by Ray Milland for a single adventure-BULLDOG DRUMMOND ESCAPES.  The film was hoped to be the start of a series with Milland in the lead but things didn't work out and Milland went on to other things.

However someone at Paramount saw something in the cast (EE Clive as Drummond's butler Tenny, Reginald Deny as Drummond's best friend Algy and Heather Angel as Drummond's long suffering fiance Phyllis Clavering) and the possibility for a series and the brought in John Howard to take over for Milland and John Barrymore to play Scotland Yard head Col. Neilsen and  a sterling series was born.

To be certain the films are largely interchangeable (the Howard films maybe the most interchangeable of any series)- Drummond is always on the verge of getting married and something happens- and the mysteries aren't mysterious but the interplay between the leads makes it all worth seeing.  Watching the film you get to see a bunch of actors doing their thing at the top of their game. Clive will always be the perfect man servant to me. Reginald Denny will always be Algy so whenever he shows up else were occasionally as a killer or cad I can't believe Algy would do that. Heather Angel is also the perfectly unflappable woman-sure to be an occasional damsel in distress but also perfectly capable of kicking ass. As for John Howard he is the perfect leading man. In a career that stretched 45 years outside of his TV work rarely was he allowed to be this big a hero and command the screen as he does in the Drummond films.

John Barrymore's role as Neilsen is an interesting one. Brought in because he was a name, even if he was on the way down, Barrymore attacked the role with a passion. Allowed to actually take part in the mysteries, he dressed up in various disguises and was there with Drummond or at least sleuthing parallel he actually gave it the old college try. For reasons I'm not too sure of, he was removed after three films. Sadly the films continued on without him- but for those three films we have a great actor doing more than just hitting his marks for money.

I love the series. I fell in love with it back when AMC was American Movie Classics and Bob Dorian was the Robert Osborne of the time. Way back when I was discovering all the great old film series before TCM ate them up and showed them only occasionally. BULLDOG DRUMMOND COMES BACK was the first of the series and it's set- as most of the series are- on Drummond's wedding day to Miss Clavering.  Things take a turn for the weird when Phyllis is kidnapped and dragged off by a J.Carol Nash for a woman who's husband Drummond locked away. Drummond can get her back but first he has to do certain things.

The film is a tense sort of romp. Outside of the fact that you know that six films follow there is a certain amount of tension as to whether Drummond will get Phyliss back. Barrymore is delightful as Neilsen, playing it often under heavy makeup so that he could help Drummond solve the case without being seen by the bad guys. Its a great deal of fun and it sets up the remaining films and all of the character relationships for the films that follow perfectly. 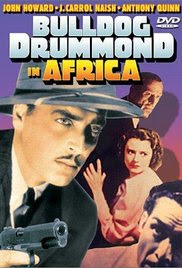 BULLDOG DRUMMOND IN AFRICA is the first of the non-Barrymore films. It has Neilsen, now played by HB Warner, Kidnapped by Richard Lane a villain played by J. Carol Naish. (seeing this film  for the first time in years and realizing Naish was in an earlier film was what prompted this piece) Lane wants revenge on Drummond and Neilsen for past interference in his crimes. He spirits the Colonel off to Morocco with Drummond in pursuit. Scotland Yard is unhappy about this since they think they are running their own game but that isn't the case- Lane has compromised them.

Another fun film, again largely for the cast interactions (and the appearance of Anthony Quinn) the film has some tense moments thanks to some hungry lions kept as pets as well a hidden time bomb.

Absolutely enjoyable- as are all of the John Howard Drummonds.

(I will be reviewing more Bulldog Drummond films over the next several months)
Posted by Steve Kopian at August 25, 2017