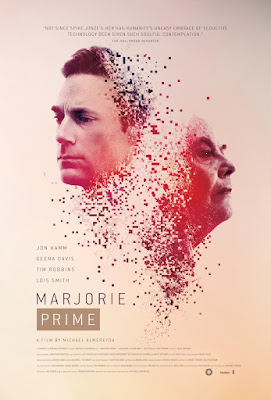 JB saw MARJORIE PRIME when it premiered at Sundance earlier this year. With the film opening in theaters today here is a repost of his review.

Perhaps we can think of it as the emotional singularity: that potential juncture when our artificial intelligence constructs better understand our inner psyches than we do. It is possible humanity or at least one family reaches this point in Michael Almereyda’s adaptation of Jordan Harrison’s play, Marjorie Prime, which screens during the 2017 Sundance Film Festival.

To help her deal with the loss of her beloved husband, Marjorie’s daughter Tess and son-in-law Jon have installed the latest in bereavement technology: an AI hologram of her late husband. They are somewhat surprised when she opts for the young, handsome Walter who proposed to her, rather than an older version that would better match Marjorie in her current advanced years. He is there to comfort her and remind her of memories that have slipped her increasingly unreliable mind. However, knowing she will not remember the truth as it happened, Marjorie will sometimes recommend alterations, to make Walter Prime’s stories better reflect reality as she would have preferred it.

Although Marjorie’s health is clearly failing in the first act, Tess is unable to resolve the issues in their strained relationship before her death. Despite her skepticism, she too will try achieve some sort of catharsis with the help of Marjorie Prime. There is a great deal of family history that has been left unspoken and even deliberately forgotten, but the primes might know more than the mortals realize.

Ironically, Marjorie Prime is a film about artificial intelligence that is deeply humanistic and insightful into the foibles and weaknesses of humankind. Almereyda embraces the stage roots of his source material, accentuating the intimacy of the chamber drama. He definitely opts for a minimalist style, but that actually heightens the elegiac tone (also thanks to a considerable assist from accomplished indie cinematographer Sean Price Williams).

Lois Smith (who originated the role on stage) anchors the film with a wide-ranging yet subtle performance as Marjorie/Marjorie Prime. Jon Hamm develops some intriguing chemistry (if we can really call it that, in this case) with her as Walter Prime. Azumi Tsutsui is terrific in her brief but pivotal scene as Tess and Jon’s granddaughter Marjorie. However, the wonderfully sensitive performances of Geena Davis Tim Robbins as the brittle Tess and achingly empathetic Jon are what really linger in the viewer’s head after it all wraps up.


Frankly, there is a lot of provocative speculation about how AI could alter the human condition that is hidden within plain sight throughout Prime. It definitely qualifies as science fiction, even though it is driven as much or more by its characters than its ideas. Very highly recommended for sf fans and those who will appreciate it as a richly textured family drama, Marjorie Prime opens today.
Posted by Steve Kopian at August 18, 2017