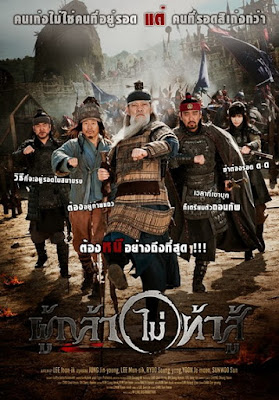 Darkly comic look at war and it's stupidity. During the medieval period in Korea the Emperor sets in motion a war between states with a promise of additional land for the winner. Once the wheels are set in motion the film shifts gears and we are thrown into the trenches of the warring armies, most of whom have been forcibly conscripted and just want to go home. While the generals and a few crazies dream of glory, most of the men dream of just staying alive.

It's a funny film, but considering the state of the world, it's one where the laughs often catch in your throat. I've read reviews that have compared it to the work of Terry Gilliam, and on some level it's true. Mostly it's it's own dark little animal...and a very good one at that.

I'm not going to lie, I like the film, but at the same time it left me feeling rather uneasy and unsettled. It took me three tries to get through it (I have the import DVD), since the first time I was called away before I got very far, and the second time I had to pause because the film wasn't what I expected (a straight on comedy). Its a funny film but the under currents and the absolute displeasure toward anyone other than the low man is rightly bothersome.
Posted by Steve Kopian at August 14, 2017