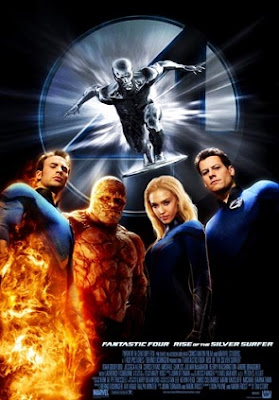 While Sue and Reed prepare for their wedding, strange phenomena begin to happen all around the world. The strange happenings are the work of "the Silver Surfer", herald of Galactus who is coming to devour our planet. Its up to the Fantastic Four to stop the Surfer and Galactus before the earth is destroyed.

I actually liked this film. It has more of the banter that made the comic fun to read, the action set pieces are cool and there is charm to it that manages to lift it all out of recent rash of dour comic films. I don't love the film as a whole but I do like the pieces very much.

The problems for me come from two places. First the film is too short. The story cries out for a more epic telling with a better sense of place, but that isn't here. Sure the plot takes the characters around the world but there is very little sense of them ever being out of a back lot. Other than the London and New York scenes the film could have been filmed anywhere and so feels cheap or like a bumped up TV movie.

The other problem is that I don't know how non comic fans are going to react. There seems to be an odd short hand which assumes that you know the comic. This is particularly true with the character development for the Surfer. His character is in many ways very close to the comic book one, except that you wouldn't know that unless you read the comic. He says almost nothing and is more or less just a silent sentinel. While this was fine for those who know the comic, my Dad and others seeing this with me were left a bit perplexed as to why the character went on to comic super stardom.

Its not worth getting into the changes from the comic, Galactus in particular, since the movie seems intent on carving out its own niche.

Worth seeing, though I would be hard pressed to say its worth 10 bucks a head.