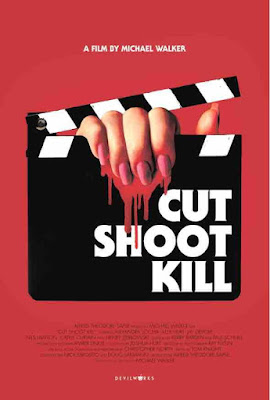 Cut Shoot Kill poses a problem for me. One of the best acted and technically accomplished low budget films I’ve run across in a couple of years But the film has a script which is not up to everything else in the film. While far from bad the film’s plotting doesn’t do anything special. Even the fact the it strives to be something in its approach it isn’t as special as it should be.

The plot of the film has an up and coming actress named Serena Brooks trying to get her career jumpstarted. Trading representation she still finds her choices seemingly limited. Offered a role in a low budget horror movie she balks, she isn’t sure if it will be good for her or not. Finally deciding to take the film she is whisked off to the backwoods town where shooting is to take place. However not long after she arrives things begin to go wrong and people begin to disappear. Could there be a mad man among them or is the director paying mind games or is something sinister afoot.

As I said the cast is great and the film sparkles on a technical level…but there really isn’t anything in the script that we haven’t seen before. If you are a long time horror fan, as I am, you’ll eat up that this really well done, but you’re going to bemoan the lack of new twists. I’ve been here before so many times that I don’t dare talk about the plot in any more detail because for the five of you who haven’t seen similar films because I’ll give away one or two twists that I suspected were coming and did.

As much as I like the film I hate that there wasn’t any real suspense since I spent a lot of time comparing the film to other films.