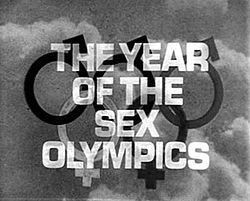 Dated BBC production about a time in the future where sex and violence are spectator sports(and a precursor to Big Brother). Much more violent, bloody and revealing then most things that come from the BBC this is an interesting meditation of the state of mass media and where we maybe going (among other things).

Set in a not too far off time the film, which was written by Nigel Kneale (The Quatermass films and TV shows), suffers from the odd 1960's style designs for the future. I'm sure in the 60's the film played better since the look of the film wasn't that far removed from the look that was happening then, however, now it seems out of place. Other bits, such as some dialog, seem dated to the point that it all feels quaint (wasn't it quaint that we viewed things that way sort of quaint). The quaintness makes getting at the ideas Kneale is trying to express harder to get at. I was kind of interested and kind of bored and at some point just got distracted.