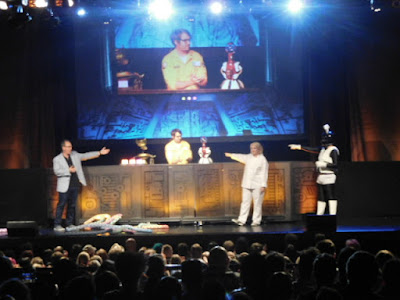 The change has been a long time in coming. As many of you know I have been talking about it for a couple of years now. Things had been delayed because I had been discussing with John and Randi about what to do. Should we get a domain and move the site or should we simply just have it redirect. We were weighing the pros and cons and then every time we moved toward a direction something would come up and get back-burnered.

Then spontaneously this past Monday I found myself investigating it and in the process of looking at domains I found that I had purchased a .net and had set things up to direct to the site.

When I was done I sat there staring at the computer screen wondering what the hell I had just done.

I texted Randi, John and Ken to tell them about the change and Ken immediately responded “ I thought you were going to wrap up Unseen”

…or as Ken said “they really are going to pry your cold dead fingers off the keyboard mid review aren’t they?”

Ken may be on to something.

The truth of the matter is I think what this means is that I’m going to be doing this for at least another year or two. I’m going to run it as a grand experiment to see what happens to things now that I’m  dot neting instead of blogspotting. Will the address change people’s minds even though for the short term absolutely nothing else has changed. I suspect it will. It’s kind of like people are fooled by fancy business cards and flashy presentations.

As for the rest however you find us we’re still here so keep reading.
----
This week looks to be  just  classic mysteries. I should also point out I'm just starting in on Toronto, NYFF and other fall festivals.
Posted by Steve Kopian at August 20, 2017