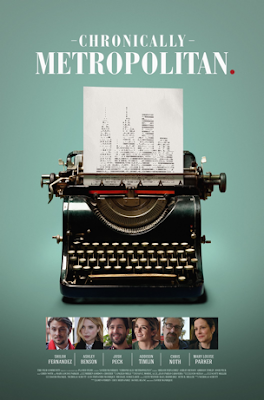 Years after writing a story about his ex-girlfriends family that forced him into exile, Fenton (Shiloh Fernandez- looking and acting like Johnny Depp in SECRET WINDOW) heads home to nominally to deal with the fall out of his father's (Chris Noth playing way older than his is) car accident involving sex and drugs and co-eds. As his family deals with things Fenton makes a B-Line toward his ex who is all set to marry someone new. Lots of cringing results.

A great cast is completely lost in a film that just doesn't work. Part of it is the casting which just seems wrong all the way around and part of it is a script which just gives us a bunch of rich intellectual jerks who aren't worth the 80 minutes of time we spend with them.

The real problem is Fenton who is this odd duck who is more annoying than charming. I never liked him and based on the reaction he gets when he returns to the familial nest and his girl friend it's clear that the family isn't thrilled either. I suppose that its supposed to be a prodigal son returning but he's still a jerk. It doesn't help that Shiloh  Fernandez plays him  as an annoying Johnny Depp by having a similar hair style and mumbled delivery.

I really didn't like this film  and ten minutes in I was checking the run time and trying to distract myself by doodling in my notebook.

Actually I hate this film and if you see it to you will too.(or if not hate you will regret the time lost that could have been used getting your feet scraped)
Posted by Steve Kopian at August 03, 2017

Email ThisBlogThis!Share to TwitterShare to FacebookShare to Pinterest
Labels: american, not worth the effort, romantic comedy