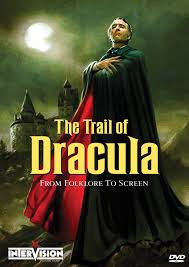 Severin Films documentary about the historical and cinematic Dracula's is a nice overview of the myth and legends of vampires and Dracula.

A mix of film clips and talking head interviews with film, horror and folklore experts the film covers, briefly, everything you'd want to know about Dracula and its influences. Its a breezy fast paced mix of material that gives you enough information that newbies to Dracula will have enough material presented to them that they will sound intelligent while old hands will find lots of new material to mull over.

Much of the new material will come from the connections to Transylvania and Vlad the Impaler. The film gives a nice over view of how the ruler was and is viewed in his own country where he and the vampire connections are both looked down upon as silly and embraced as money makers.

As a documentary its a good distraction and definitely worth a look see....

...however if you're hesitant to plunk down money for the DVD copy of the 65 minute film it should be stated that the film comes with some extras which are cool (additional interviews with Christopher Lee, Udo Keir, Werner Herzog and Francis Lederer which while brief are tasty) and one that is a must have, namely 94 minutes of Dracula film trailers which are just way cool.
Posted by Steve Kopian at August 31, 2017