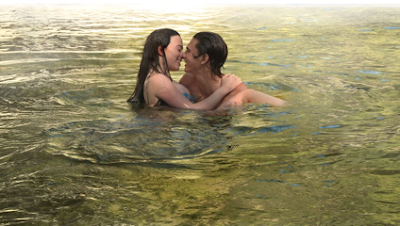 As the Vietnam War rages, civil rights are being fought for, and the sexual revolution begins to heat up a teenage girl grapples with her place in the world. Running off with a friend on a motorcycle for California  she hopes to come to terms with everything going on in the world and herself.

Hitting every cliche you can think of and some you probably have forgotten LIZA LIZA is exactly the sort of bittersweet coming of age film that would have played drive-ins in 1966. The trouble is that it's now 2017 and this sort of thing just doesn't work.(Not that it would have worked in '66 either where this film would have been the bottom of a double or triple feature)

Weakly acted and oddly scripted the film never begins to catch fire. We are bored more than anything as the lines that are so obvious to us are poke  aloud with the the characters on the screen.

Mikey Madison's often breathy performance just brings giggles instead of connection. How could anyone be this innocent- even back 50 years.

Blame should fall squarely on writer director Terry Sanders who is clearly out of touch with today's audiences (and probably those of 1966 as well) a fact instantly revealed when you realize the title comes from an Al Jolson song from the 1920's. As heartfelt as the film is it' stuck in one man's idea of a past that never was except perhaps in low budget Hollywood's product.

Definitely a film to pass on when it begins playing today in cinemas.
Posted by Steve Kopian at August 18, 2017

Email ThisBlogThis!Share to TwitterShare to FacebookShare to Pinterest
Labels: american, drama, not worth the effort