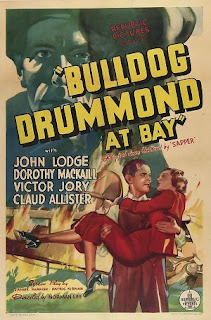 John Lodge is Captain Hugh Drummond in one of a long series of films (its one of three films from 1937 all with different Drummond's. The other two are the miscast Ray Milland and the perfectly cast John Howard).

Here Drummond and his friends take on a group of foreign spies trying to get their hands on a new plane. One of the baddies is played to perfection by Victory Jory, who really turns in a highly evil performance.

This is one of the darkest of any of the Drummond films with the bad guys really doing a number on anyone and everyone who fall into their hands. This is a solid, if slightly nasty little film that plays very differently than the seven films that followed with John Howard in the lead. Those films, while good little mysteries of their own, were just a tad lighter than this film. Very much worth a look, especially if one looks at how the character changed in one year by watching Ray Milland in Bulldog Drummond Escapes and John Howard in Bulldog Drummond Comes Back
Posted by Steve Kopian at August 20, 2017