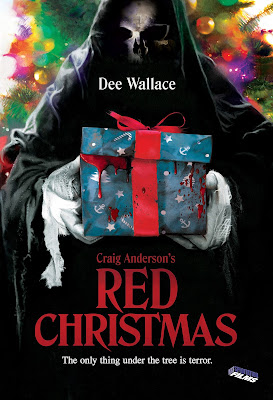 I saw this film when it played last year at Fantasia. With the film hitting theaters Friday here is a repost of my review:

Certain to become a favorite film on anti-abortion rights groups everywhere RED CHRISTMAS is an uncomfortable mix of horror and comedy.

The plot of the film has an anti abortionist blowing up a clinic. In the wreckage he finds a still alive fetus in a bucket and takes it home to raise it. 20 years later the child returns to his family on Christmas day and mayhem results.

I'm not sure if that's a good thing or a bad thing.

But at the same time it has a sense of humor that undercuts the seriousness. Some of the jokes are goofy, some of the deaths over done and worst of all Cleatus, the aborted child, looks like a joke, wrapped in bandages and black robes. It pushes things too far toward not being completely serious, or serious enough. I don't know if director Craig Andersen is serious about everything he is doing of not- is he just trying to push buttons or is he trying to say something?

I'm sure there are going to be people who will argue both sides. For me the film is going to take some thought.

Taken on it's on terms it's a more than serviceable psycho on the loose film with a killer with a disturbing origin. Worth a look for fans or mad killer films.

Red Christmas will open in Los Angeles August 25th for a weeklong run at the Laemmle Music Hall, and expand to screens in San Francisco, Denver, Dallas and more over the coming weeks.
Posted by Steve Kopian at August 23, 2017