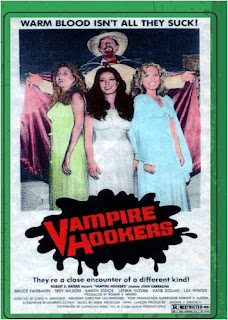 John Carradine is a poetry spouting Dracula in the Philippines in Vampire Hookers, a late day and drive in and home video staple. It’s a blast if you’re in the right frame of mind.

The film centers on a couple of sailors on shore leave. Looking for love in all the wrong places they end up meeting the bevy of titled beauties who are picking up guys in the local bars and bringing them to their cemetery home where Carradine holds sway. Mirth and no chills result.

If you are looking for a horror film with chills look elsewhere. While there is a little tension, this film has no real scares. Almost everything in it is played for laughs with the result that any late in the game attempts at being frightening are lost. Mostly this is a rather unPC low brow humor. Most of the jokes are funny, but in a that’s so bad I can’t believe I’m laughing this sort of away.

I’ve seen this film any number of times over the years and I’ve always enjoyed it…though almost every time I’ve seen it I was curled up on the couch with friends or family and we picked on it mercilessly. This is a film that cries out for audience interaction and plays better when you are part of the experience.

Recommended for a Saturday night on the couch with friends
Posted by Steve Kopian at August 30, 2017