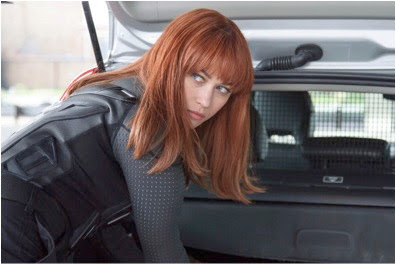 Olga Kurylenko stars as Alexis, an infiltration expert who ends in a world of trouble when a heist goes wrong. This put her in conflict with an assassin/fixer played by James Purefoy who wants an electronic device she accidentally stole. It all becomes a bloody battle in which survival is uncertain.

Stephen Campanelli's debut film is full of slam bang set pieces. Campanelli seems to learned a great deal working with directors such as Clint Eastwood as a cameraman because he knows how to stage action and set up scenes.  A scene where Purefoy tortures some one on top of a bed under which Aleis is hiding is a mini masterpiece of suspense.

The problem with the film here is the script. A knotty international thriller with political overtones the plot never seems to fully come together. To be honest I still don't think I've grasped the plot as well as I should have.Then again I'm not sure the writers did either and they fell back on cliches and confusion to keep the audience interested. Additionally some of the dialog seems stilted, more in line with the writers trying to get information across at the expense of sounding as if its real people talking.

On the other hand the film moves along at a great clip and you really don't have time to think too much as we are plunged into one set piece or another. Its the set pieces that are the reason to see this and having seen more than my fair share of recent action films I can honestly say they are worth the price of admission even though the plot lets you down.

The film opens tomorrow in theaters and on VOD and is worth your time and money, especially if you're looking for something that isn't a huge Hollywood blockbuster.
Posted by Steve Kopian at October 15, 2015