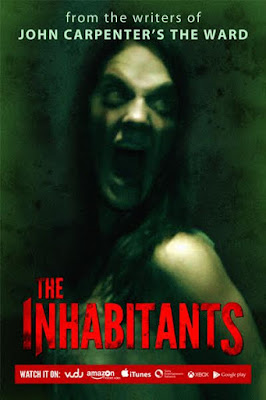 Young couple buys an old bed and breakfast and decides to make a go of it. Unfortunately for them they are unaware that there are some permanent guests in the house.

Creepy as all hell throw back horror film is kind of a kin to AUDREY ROSE,  THE CHANGELING (not the Clint Eastwood film), BURNT OFFERINGS and several others from the 1970's that were heavy on mood and creepiness as opposed to blood and gore.This is a low tech, practical effects sort of film that doesn't over do the violence.

Despite my being high on the film it’s not a perfect film. So let me get the bad stuff out of the way at the top so I can concentrate on the good stuff. The first minor problem with the film is that Dan, the husband, is a little too chatty. Its not so much that he talks too much it’s just that some of what he says isn’t necessary. We don’t need the silences filled with things we can see. The other problem is that the film’s logic breaks down slightly in the second half. There were a couple of events that had me scratching my head.

And yet despite the flaws this film creeped me out. Additionally kept me watching all of the way to the end and not getting up to go get a snack, I wanted to to see what happened and I didn’t want to break the tension.

What I like about this film is the low tech approach to the film. What we see is what we get.

Filmed primarily in and around an actual historic bed and breakfast THE INHABITANTS has a tactile feel of being real. It may be a small thing but when you watch the characters move in and around the inn you feel that’s it’s an old place. Things as simple as the door to the building or rooms look their age. I know you wouldn’t notice it, but I did. I love to look at the small details and when I see something like that it impresses. The reason I’m mentioning this is because many filmmakers will film exteriors in one place and then go and shoot the interiors in another place. Old houses suddenly have new doors. Windows don’t match. The Rasmussen Brothers clearly didn’t do that. They shot their film on location.

I love the fact that the film doesn’t rely on computer generated effects (or blood). Pretty much everything we see is a practical effect. The thing that got me at the start was a simple trick. I know how it was done, but where and when it was done literally had me talking to the screen. Elsewhere in the film the tension is created by someone or something passing by or through a frame, noises or something just not being right. And if you think I’m going to tell you what they are you’re crazy- you’re going to have to face the fear on your own.

And I’m giving bonus points to the Rasmussen Brothers for not filling the film with cheap ass jump scares. So many films are scary not because you’re really afraid of what happening on screen, you’re afraid because you’re waiting for something to jump out at you. Things don’t jump out at you, there is no sudden cuts with loud sounds there is just slowly building unease. We are frightened because an old lady looks old and broken and we can tell her silence hides a terrible secret. It’s a fear that doesn’t go away. Say what you will finding a wheel chair with restraints attached and no explanation is much more scary than a bloody knife. With the knife we know what happened, with the chair we don’t and our mind fills it all in.

This film really is a throwback to when films weren’t crimson bloodbaths. I mentioned THE CHANGLING above and this film bears favorable comparison to that one. Made by Peter Medak and released in 1980, the film starred George C Scott as a man who finds he’s haunted by something. What that something is I won’t say, you’ll have to just see the film, but the fear and the screams the film generated were purely by implication. There was no real blood and violence just shadows and fleeting glimpses. When the film was released critics were thrilled and commented that the best horror film of the year was not a bloody mess ala that year’s big hit FRIDAY THE 13TH. THE IN HABIANTS is like THE CHANGELING and it’s low blood level.

This is a really good film. It’s a creepy little film that will hang with you for a while after you see it. I don’t think it will shift things away from blood and gore, but like THE CHANGELING before it it’s nice to know that there are some people and films out there that aren’t blood soaked endurance tests.

Very much worth your time and money when it hit VOD tomorrow.
Posted by Steve Kopian at October 12, 2015