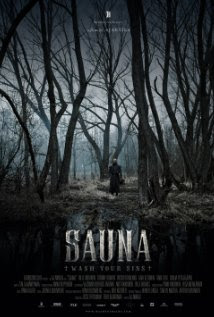 Finnish horror film concerns the parties assigned by Sweden and Russia to draw the border between the two countries in 1595. The need to do so comes out of a 25 year long war that became so terrible that both sides realized that they had to call an end to it. As the party heads off into the wilderness they come upon a village in the middle of a swamp. In the town no children are born and the elderly don't die. There is also a sauna, where dark things happen.

Focusing on two brothers the film is a low key film with some blood and little gore. In a weird way it's less a straight on horror film then a Grimm's Fairy Tale like meditation of damnation and absolution. It's an odd film in how it doesn't play by horror film conventions. I'm still not sure what I think of it, but there is something about the performances and the feel of the film that refuses to go away. If you look at IMDB you'll find that some people love it and some people hate it. I'm somewhere in the middle, and rolling between love and hate. Either way it's made a big enough impression that I think it's worth a try.