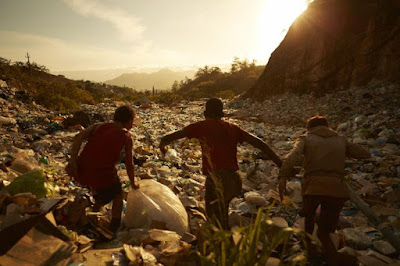 When Stephen Daldry and Richard Curtis get together to make a film we at Unseen Films sit up and take note. Daldry along with Christian Duurvoort have made a film that is based on Andy Mulligan's novel which almost won some young adult awards but was rejected because of the violence and language.

With the film, which has has stopped bouncing around the festival circuit,  finally landing in US theaters this Friday (as well as on VOD platforms) and because I was busy with the New York Film Festival I asked the newest member of the Unseen family Ariela to go to the press screening and tell you all what she thinks.

Intense. If I had to describe the movie TRASH in one word, that's what it would be. I was practically on the edge of my seat the whole time, having to remind myself to breath.

The film takes place in Brazil,it is mostly in Portuguese with English subtitles. It is the story of 3 boys who live in a garbage dump and also work there. One day they find a wallet which has money, an ID, a key and several other things. The day after they find it, the police come to the garbage dump and tell the workers that they're looking for a wallet and that it's very important they find it. They also said there would be a reward for the person who finds it. Instead of the boys handing it over to the police, it peaks their interest. And so begins the boys adventure to find out what this wallet is all about. It almost becomes a murder mystery of sorts. What will they discover next? How will they avoid the police?

Watching this film was exciting, as we watch the boys quickly run, climb, crawl, and jump all over things. The film deals with corruption and bribery. Some scenes were hard to watch because of the violence.

Martin Sheen is a priest in the movie & Rooney Mara is his assistant. They help the boys, as well as help the poor and homeless people in general. I feel that their roles could have been stronger in the movie.

Overall, I really enjoyed this movie. I think if I had watched the trailer ahead a time, I wouldn't have been interested, but I'm glad I saw it. Was very suspenseful and you kept wondering what would happen next.