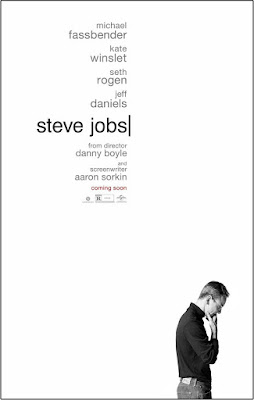 If you were to ask me what I took away from Danny Boyle's STEVE JOBS it would would be that he was an absolute dick. Why no one didn't haul off and cold-cock him remains a mystery that eludes me. Personally I would have beaten him to death and danced around his body laughing maniacally had he treated me the way he treats the people in this movie. Why anyone put up with his shit amazes me, especially since he fell on his face a good number of times.

What Boyle has done, working with an Aaron Sorkin script is to fashion a very compelling, frequently funny look at the man who gave us the iPhone and other monstrous devices of the modern world. What we do is to drop in at three points on Jobs life, right before major product launches. The first is the release of the Macintosh computer which failed to find an audience and got him fired from Apple. Next we see him on the day he unveiled the NEXT computer which was super expensive and didn't work- but which Jobs created with the hope of eventually getting back to Apple. Lastly is the launch of the iMac which set Apple onto domination of the computer market. Along the way not only does Jobs deal with his underlings but also his daughter and her mother(the former he shows almost no affection)

Watching the film I wondered how a man so anti social, so not in touch with any reality except his own could be hailed as the second coming by so many people. The man is an absolute asshole who refuses to believe his daughter is his because the paternity test said there was only a 94% chance she was his. He twisted it so that in his mind one of 28% of the population of America could have actually been the father. How that works makes no logical sense but it gives you a clue to Jobs screwed up view of reality. It almost beyond belief that a man who couldn't construct a computer or program one was considered a computing genius.

And yet in this small dose Jobs is a fascinating main character. Watching this guy go through his paces and change the world is amazing. You can't take your eyes off him. I suspect that much of the reason it's so fascinating is that we know how it ends and we wonder why no one killed him. Watching it from a distance you realize that had Steve Wozniack or Andy Hertzfeld had told him no his whole life would have gone differently.

I have to applaud Boyle and Sorkin for they have crafted 95% of a truly great film. This is largely a wonderfully constructed portrait of a man and our time. And I do mean it is a construction but one based on truth, since there is no way that all of the things that fall together on these three days at exactly these moments. It would be nigh impossible. And yet it all feels organic. We willingly believe that all of the bullshit about technical problems, personal hurts and familial problems really would crash together in the 40 minutes before each launch.

I said that the film is that is only 95% great and that's because there is a shift that comes in the final minutes that doesn't ring remotely true (even if it is emotionally moving). In the final minutes the film shifts from feeling real into one that is highly manipulative. What happens in the final minutes is that Steve Jobs, one of the biggest sons of a bitch you'll ever see suddenly has a an epiphany and turns out not to be so bad after all. Suddenly he realizes that he might have been wrong about things so he will pay his daughter's college tuition (which he was with holding), he will admit he named a computer for his daughter and ah,schucks, he will reveal he really loved her all along (its a great movie moment but doesn't belong to this character). Oh yea and if  that wasn't enough he gets the idea for the iPod too.

Where did all of this come from?

The sudden change felt completely wrong and left me wondering what the point of it all was. Yes it's Jobs life- but what was the thematic point? What are we supposed to get from it? I could accept that had Jobs remained a dick we could take away that being one is okay if you're like Steve Jobs, but the out of the blue change of heart muddies things terribly. I have no idea what I'm supposed to think.

I do know that the film is really good. Ending weirdness aside I enjoyed the hell out of it. It really was worth standing on line in the cold rain for two and a half hours to get into the New York Film Festival press screening. I say that simply to illustrate that the film over came my mental blocks. I was so sold and tired by the time the film started that it was going to have to be super or else I was going to hate it. It was great fun and worth the wait.

I have to add that the cast is first rate and look for Kate Winslet to get on the Oscar short list. She is fantastic and I kept waiting for her to show up for half the film, before I realized that she had been on screen the whole time.

Reservations aside put STEVE JOBS on your must see list.

The film is done with it's New York Film Festival screenings. It will open Friday in limited release before going wide shortly there after.
Posted by Steve Kopian at October 04, 2015