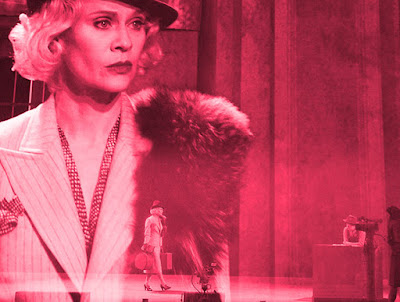 Helen Lawrence is a cinema/theater hybrid that has the cast performing the show live on stage behind a scrim/screen while the performance is combined with backgrounds and projected onto the screen in front of them. Its neither full stage performance nor a film one but a blending of the two where sometimes one style takes the fore front over the other.

Set in 1948 the show is set in Canada in and around Hogan’s Alley, a seedy backwater of the city the town is trying to clean up- which is a fancy way of saying the powers that be want to take over the properties/illegal activities for their own ends. As the locals try to find their footing on the shifting landscape a mysterious woman enters looking for a man named Percy. Could this Percy be the local bookie who is looking to set up in a ritzier surroundings once the digs he’s in is torn down? And could it be linked to a splashy murder in LA the year before?

It takes a little bit to get your brain around the shifting levels of the show, sometimes the live performance is interesting, sometimes the film is, sometimes we are not given a choice what to watch. Your eyes bounce from the bare stage to the image on the screen which through the magic of computers is a fully realized location. While you know how it’s done there is still some part of your brain that can’t fully grasp how the actors can both be nowhere and somewhere. For 15 or 20 minutes you have to work to with the duality, and then it becomes easy and natural. It’s a clever trick that’s fun for the show but it isn’t something would want to watch on a regular basis.

Technically the show is very good. For the most part the blending of live actors with fictional backgrounds is nearly flawless. A real world is created.

The cast is also very good, though some of the hard boiled lines can occasionally be delivered with too much of a knowing smile in the voice.

The weakness of the show is the script which is good but not quite as good as it should have been. The scripts flaws come from two places. The biggest weakness is the result of a slack first two thirds which moves the plot along and builds character, but isn’t as gripping as exciting as it could have been. Watching the show at BAM last night there were numerous walk outs, I’m guessing because for a chunk of the tale it’s a weird roundabout that seems to be setting a great deal up. Yes the show picks up and moves like the wind in the final third- but it all culminates in a series of blackouts that end the show which reveal the shows other major flaw- nothing is resolved. And while several characters do end up dead, none of the major plot lines are resolved. That would be okay if the show didn’t have fifteen or sixteen balls in the air, but it does and when THE END came up on the screen the audience, myself included just sat there staring. There was no applause. The final unresolved bit would have been fine if all of the other bits had been resolved – but nothing was and even the dead bodies created more questions as to what happened next. I could have excepted it as if there was some clue as to possible resolution at fade out but there is none, and a show that had started to pay off dividends for the slow start stumbles over its own feet and crashes through a window to end up in a bruised lump in the final minutes. What should have been a great show ended up being just okay.

This live film noir show is the second show at BAM this season to explore live performance as cinematic event. The other show, Nufonia Must Fall was a kind of living cartoon with puppets telling a robotic love story. While Nufonia wasn’t as technically whiz bang as Helen Lawrence it was better written with the effect that Nufonia will always have a warm place in my hear while Helen Lawrence is doomed to fade and be forgotten.
Posted by Steve Kopian at October 16, 2015