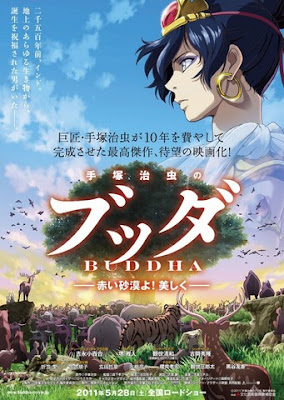 This is a repost of a review that ran in connection with the 2012 New York Asian Film Festival. It was a review that go buried in a long post of 22 films(I was young and stupid back then). This is the review unaltered for the passage of time:

This opened a month ago in Japan and is a highly anticipated bit of anime in the US as well on the basis of the questions I'm getting. I've seen it, and a full review will be coming when the film premieres at the festival by some one other than myself (Eden is making a special effort to see and review the film).

The reason I'm not reviewing the film is that I'm too close to the source. Osamu Tezuka's Buddha is one of the milestone novels of my life. It's a story that radically changed how I thought and saw the world. Fifteen minutes into the film I realized I was not the audience for the film. I found the paring down of the narrative too extreme (this is the first of three films that is trying to compress roughly 3200 pages in 8 volumes into say 6 hours of screen time) and the characters are more typically anime in style with only the barest hint of Tezuka's artistic style.

Does the film work? For me no. But I'm the wrong person to ask. I have personal issues which is why I'm having some of the other people here at Unseen Films take a run by it. That said I am very curious as to how the second and third film will play since the film finally feel focused in the closing moments. (If and when you see it I would be curious to hear what you have to say)
Posted by Steve Kopian at October 22, 2015