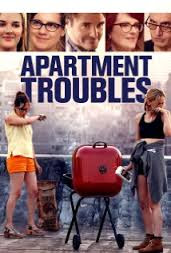 Do you think I can get away with just saying "skip this one?"

Would you listen to me if I just said skip this one and go on to something else?

Two women, Olivia and Nicole, who have no visible means of support are evicted from their apartment and decide on a whim to chuck everything and go to LA . Once there their friendship is tested and...well you know.

Except you don't. Nor do you want to.

I kind of was looking oddly at the film from the start with the weird exchanges between the two women, and the odd behaviors, such as Nicole (I believe) freaking out because the cat went in her room because she's deathly allergic- which was odd since she lives with the cat. Anyone I know allergic to cats stays the hell away from them. The film completely lost me when they decided a short while later to cremate the dead cat on the bar-b-que when it dies. It wasn't funny, dramatic or anything other than stupid.

To be fair, the film is well made and well acted. I have no problem with the film on any technical level. On the other hand the script, is just god awful. It gives us a plot that makes no sense and characters that were shipped in from the ass end of a dead whale. I mean seriously, there isn't a real person anywhere in this film. Who behaves like this? No wonder one of them has been cut off from her family. I would love to say that Jess Wexler and Jennifer Prediger who play the leads deserve better except they wrote and directed this turkey so they have no one to blame but themselves. Please some one give them acting roles, even jobs directing, but at the same time keep them away from a word processing program.

The film is being marketed by listing Will Forte, Megan Mullally and Jeffrey Tambor above the titles but all of the roles are small.

Even though this is only 70 minutes long (not including the end credits) this is one you can miss.

APARTMENT TROUBLES hits home video tomorrow- and if we're lucky home video will hit back and this film will disappear quickly
Posted by Steve Kopian at October 05, 2015

Email ThisBlogThis!Share to TwitterShare to FacebookShare to Pinterest
Labels: comedy, drama, not worth the effort, wtf