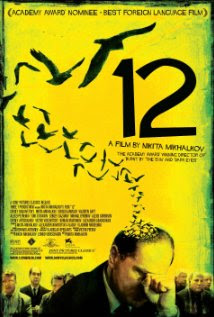 From the director of Barber of Siberia comes a version of 12 Angry Men set in Russia. Instead of a boy and a knife its a Chechen boy who kills his step father. The film is pretty much exactly the same, it's 12 men in a room, in this case a gym converted to a jury room, talking about the case that they are deciding, though with the political implications of one of the Russian wars looming over everything.

As someone who doesn't like the original film version of the story I found this film to be a revelation. The rigid structure of the Sydney Lumet film was restructured into something less formal. To be certain everyone follows similar paths with some expected character arcs, it takes a while before you can pick out who is going to be which character, which is nice since it makes clear that the film is an expansion of the original tale not a simple retread.

What floored me was that the first time I saw the film I did so with out subtitles. I had picked up the film in New York before the US DVD release in a Russian store and had been told it had subtitles. When I got home I found it didn't. Being too lazy to go back into the city I decided to tough it out and just watch it. Strangely I got into it. The story isn't far off from the original that you can't follow what is happening. Also the fact that the actors involved are some of the best working in Russia today helps to put the whole thing over. To be certain I got more on the second time through with subtitles but the fact that I could watch and understand with out speaking a word of Russian says a great deal.