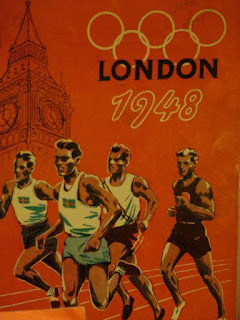 The official film record of the 1948 London Olympics is a great deal of fun. Its a trip back to a place and time when th Olympics actually meant something and wasn't crass and commercial.

Taking place a three years after the end of the Second World War the Olympics were a sign that the universe was getting back in line to what it had been before Hitler and the Axis powers tried to set fire to the globe. London and much of the world was still reeling from the war but they were going to put on a brave face.

The film record of the games has a couple of running times. I had initially seen the film on the now defunct VOOM  HD cable service. The film running  over two hours put you inside the games and the various events so that you actually got caught up with what was happening on the playing fields. Seeing it several years ago I fell deeply in love with the film and its wonderful sense of place and time. I tried to track it down on DVD but other than an expensive import I couldn't find anything. Recently however I found that the Olympic committee put a 95 minute version of the film on to You Tube which is serviceable but noticeably shorter if you've seen the longer version

One of the things that I love about the film is that the film focuses on the games and events as opposed to some of the recent film records which put a spin on each segment as we follow some deserving athlete. Back in 1948 everyone was important with the result we truly get caught up in what is happening. Of course it helps that enough time has passed that odds are we don't know who won what.

For me one of the trippy things that in watching the film is watching how things have changed. We've gotten faster and in the case of something like the pole vault, modern materials have allowed us to go higher.The world record was 4.77 meters (15.65 feet)  when these games happened, today the record is 6.16 meters (over 20 feet).

I really like this film a great deal. It left me feeling all warm and fuzzy and ready to dive into some other older Olympic films.
Posted by Steve Kopian at October 17, 2015