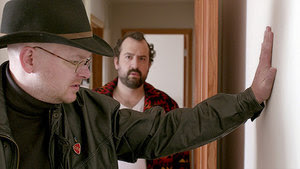 Dan, an artist finds that something is haunting his vacation home and moving his paint brushes around. The first person he consults says that he shouldn't get rid of the ghosts but let them be, To get rid of them would be "an asshole move".  Dan then consults a ghost hunter named Os who doesn't seem to be wrapped to tight and over the course of week they talk, hunt ghosts and then things get weird,

Uneasy mix of horror and uncomfortable comedy never finds the right blend. Yes there are laughs and some jump scares but the two seem to be coming from two separate films.

On the other hand the characters are more than a bit of an ass so we really can't root for them so that when the tables turn and we need to feel for them we really can' because we have either people we don't like or caricature that we haven't connected to.

Worth a look for horror fans, but only if they wait for streaming.
Posted by Steve Kopian at August 05, 2016