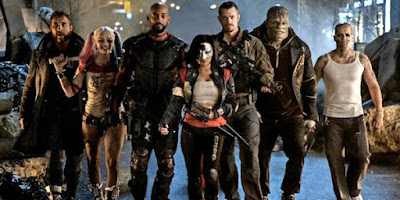 I thought Suicide Squad was great.

I won’t say that the film isn’t flawed, the film shows signs of studio tampering (this is the third version after David Ayer’s version and a pure studio cut), however it does have good characters, great action and some witty lines. I was entertained for two plus hours.

The problems with the film come from couple of places.

The villains and their plan are beyond bland. They are the weakest characters in the film and the lack of a real baddie does hurt the film. However the film ultimately isn’t about beating the villain so much as getting to know the characters of the Squad. Hell, there is a point where the plot flips and we’re told what the Squad is really supposed to do which makes you realize how unnecessary the villains are. (and I can’t talk about the villains at this point because as I write this the film has only just opened and I don’t want to give that away)

The also suffers from being a set up story. Say a half an hour or more of the film is just setting the table, explaining the squad and who the characters are. Remember these are largely lesser characters so they have to be explained to the audience since they are not as well-known as Superman or Batman. Additionally since this is the first of a planned series they have to give us something to latch on to for the net film, they can't just give us fodder for the undertaker. I like that they do kill some, but as DC found out with the comic series you need characters for people to follow to the next film.

And as I said there are signs of the studio farting around with the film. I say that because there are bits of the plot that seem to be missing, some details are not explained well (the villains plan). Some of the back stories of the squad seem to be missing (Katana, Boomerang and Killer Croc get the short end of the stick) and you get the sense some scenes should be longer, a feeling fed by scenes in the trailers and commercials not in the finished films. (The only complaint anyone had at the screening I attended was the fact some jokes in the trailers were missing from the finished film)

For the most part I really liked the film. I thought the cast, with the exception of the villains, are excellent. I like how the character are, for the most part, given added dimensions by the cast’s performance rather than the script. Diablo breaks your heart because of Jay Hernandez performance and the underwritten Killer Croc is something special because of Adewale Akinnuoye-Agbaje's force of personality. I especially like Viola Davis as Amanda Waller. To me it’s a demonic Oscar best bet. I’m told it will never happen, but she is a fantastic and deserves some awards. Frankly the film survives and thrives because of the characters. While it is difficult to get a bead on many at first, the film probably does have too many characters, everyone begins to fall into relief once things get going.

I know some people have complained about some of the cameos. Batman is here, as is the Flash and there are references to other characters. I don’t have a problem with them and I like that they add to the building of DC’s universe.

And then there is the Joker. The Joker is only in the film for 15 or 20 minutes throughout the film. Jared Leto is a wonderfully unhinged. He is the sort of off the rails person that makes the character so dangerous in the comic. I like his performance more than Heath Ledger's because there is no logic and reason only the moment. Ledger has a plan to prove something to Batman-there isn't madness but reasoning, Leto simply is acting on his whim, who the hell know what is going on his brain? Anything can happen at any moment. The result is its chilling because he can turn at any moment.

For Leto's Joker there is no logic and reason except for Harley. Harley is the love of his life and as we see he will do anything to get her. I had a discussion about the relationship in the film which in which we pondered if it wasn’t as dysfunctional and abusive as in the comic or animated show, and it may not be, but do understand the focus of the relationship in this film is different than in the comic/animated series. We only see so much so we can’t know everything-the film only shows us glimpses and we have jut hats here not multiple episodes or issues to flesh it out. Additionally because it’s “real” people the characters have to behave differently than if animated. Real people can't follow animated or cartoon characterizations 100% down the line or it comes of as cartoony or just wrong. Here they break with the formula enough for me so the relationship works. We’ll see where it goes in later films.

I really like the action in the film. The set pieces for the most part work. I like how the film goes from pure action and motion for the sake of the motion and action to a series of set pieces hinged on the interaction of characters. The end battle works not so much because of the action but because we are invested in the characters. We feel the losses and are carried along because we like them. What happens and who lives and dies move us because we care. There is danger and there is a cost to the action, unlike say in a James Bond or Jason Bourne film, we don’t know who is going to walk away.

I’m trying to work out why the critical reaction seemed to be so negative- though I’m sure if I actually read the reviews it would be less negative than the media portrayed it-I mean Rotten Tomatoes is either yea or nay and they can’t handle mixed reviews and if anyone has ever taken the time to read reviews of any film that the media deems to be a critical bomb the actual reaction is rarely as clear cut as portrayed (BATMAN V SUPERMAN anyone). Could the reaction be the result of the darkness of the DC universe? Yes there are jokes but it isn’t a fun place- I mean lots of people die horrible deaths both here and in Batman v Superman. There is very little hope in this Crime Alley.

I like Suicide Squad and recommend it, especially if you realize it a dark film on every level. I can’t wait for the sequel

Now if we could only a look at Ayer’s original cut.
Posted by Steve Kopian at August 05, 2016