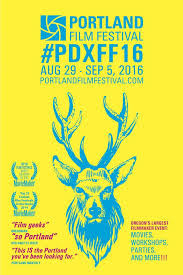 The Portland Film Festival is a gem. I was introduced to the festival last year and it instantly became one of my favorites thanks to discovering films such as MADE IN JAPAN, TYKE:KILLER ELEPHANT, THE GLAMOUR AND THE SQUALOR and of course the must see THE BUSINESS OF AMATEURS. When it was done I was thrilled to realize that I had found the perfect festival to end the summer and prepare myself for the fall season.

And now as August winds down I’m heading back for another go round.

What makes Portland so cool is that in addition to the films they have tons of special events and classes. There is so much I don’t know where to begin. So much is going on that you could go to the festival and never see a film- which is a cool thing when you thing about it because it means the festival is more than just about film but culture. It’s a festival that’s alive and vibrant and I’m trying to decide where I’m going to begin wading in. (Here is the program book- take a look and you too will start booking your trip now)

I’m not going to lie and tell you I’ve seen a ton of their films, because I haven’t, not yet anyway. Things going on in my personal life have prevented me from getting a head start- but not to worry once the festival starts Monday I will start dropping reviews. We’ll be going through this together this time so expect lots of reports from the road.

Honestly there are a ton of films I want to see WIZARD MODE, NEIL STRYKER AND THE TYRANT OF TIME and UNSEEN. I’m especially looking forward to ON THE FARM which played at Women Texas and I got several frantic emails about telling me I had to see it. Hopefully it lives up to the hype.

Several of the films have played at other festivals we’ve covered so her are a few reviews to mull over until the reports from the fest start up.

And as for SHE SINGS TO THE STARS I've seen it somewhere along the road but a guest reviewer dropped out so it never got reviewed . If I remember it correctly its not bad.

If you’re close to Portland and love film you need to go. If you don’t live near Portland but aren’t having major surgery you need to book a flight and go. Trust me great things are happening in Portland and they are all at the film festival.

For more information go here
For Tickets
And to help you pick a film here is the program
Posted by Steve Kopian at August 26, 2016