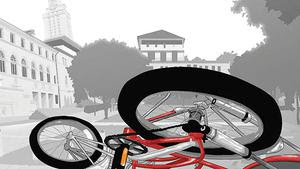 TOWER is a look at the shootings in 1966 when Charles Whitman climbed to the top of the tower at Texas University and started shooting people randomly. The event, one of the first mass shootings, rocked the nation. It served as the inspiration for Peter Bognovich’s film Targets which some called shameless exploitation.

The film is a mix of rotoscoped animation over actors reenacting and performing firsthand accounts of the events of the day. The film then flips in the final half hour to film of the actual survivors talking about their lives since then as well a look at the shootings in the context of our current shoot crazy world.

This is one of those films that’s hard to review. A more or less straight forward telling of the events one can’t argue with history. This is what happened and it’s expertly assembled. The only two things one can quibble with is the use of animation or the last half hour’s shift away from animation and to a more conventional style. I’m not quibbling I’m simply saying that if one wanted to quibble that’s the place.

Truth be told this is a powerful film. It’s a film that shows us a time when mass killings really shocked us and were not part of the daily news cycle. While I don’t think I would want to go back to simpler time for most things the lack of crazed loonies with high powered weaponry is one thing I could do without.

Certain to be on numerous best of 2016 lists this is a kick in the pants and a must see.
Posted by Steve Kopian at August 02, 2016