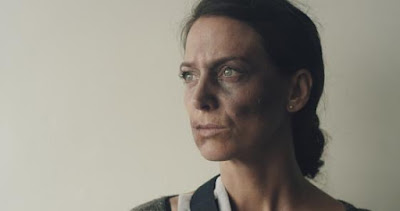 I have no idea if I like TOY or not. There is something about it that didn't quite work for me, but at the same time its a ballsy defiant film that is uniquely its own thing. I completely understand why it was programmed at Women Texas Film Festival where it is one of the absolute must sees.

The film follows an artist named Chloe who is having assorted problems. Difficult to deal with she is battling various substances, bad relationships and bad choices. When she meets Kat, a call girl, she begins to fall in love. However the pair's demons threaten to rip them apart.

Beautifully acted and hauntingly shot TOY is a film that burns itself into your brain. A late addition to Women Texas FF, it's clear why it was added- once seen you can't forget it. I am in awe of the film simply because it seems to frankly go where few films have ever gone. There is something about the film and it's characters that one can not shake.

To be honest I have no idea if I "like" the film. I think it starts awkwardly, (Chloe challenges us from the start and it makes it a battle to get into) and there are some rough spots along the way, but at the same time the film is a cinematic slap in the face. It forces you to confront it and it's themes head on and it doesn't give you a moment's respite. Its one of the most combative and challenging films I've seen in 2016 which  alone makes it a must see film.

Films like TOY are why I go to film festivals. A darkly challenging film it is decidedly off the beaten path and trip you'll want to experience. You may not like it but you'll at least know you're seeing a film that isn't like anything else you've seen all year.

For tickets go here
Posted by Steve Kopian at August 19, 2016