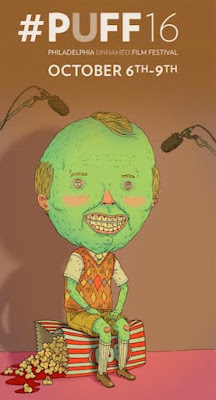 PUFF is thrilled to present 6 feature films and 22 shorts for the 2016 edition of the fest!
​
The Philadelphia Unnamed Film Festival is proud to announce the lineup for its inaugural year taking place in Philadelphia, PA from October 6th - 9th at CineMug and Adobe Cafe. PUFF will highlight genre features and shorts from around the world, including supernatural horror WE GO ON, and the Northeast premiere of GUN WOMAN director Kurando Mitsutake’s newest feature, KARATE KILL.
​
“We are extremely excited about our program,” says PUFF co-director Madeleine Koestner. “We were amazed by the amount of submissions we received, and it made the selection process very hard on us! We wish we had time to screen all the films that were submitted to PUFF, but we think we did an excellent job of putting together an interesting lineup of eclectic films by a diverse group of filmmakers.”

The festival kicks off with a free screening of short film SMALL TALK by Nicole Solomon on Thursday, October 6th at CineMug. Immediately following the screening will be the opening night party.

On Friday, October 7th PUFF will begin its feature selections with the British horror / comedy EGOMANIAC, whodunit-slasher film DEAD BODY, and zombie gross-out gore fest NIGHT OF SOMETHING STRANGE. Friday’s program will also include the 30 minute shorts program, The Bizarre Block. “We asked for bizarre films and we got what we wished for,” explains Koestner. “The Bizarre Block includes three polarizing films you would never see at a mainstream film festival. If you like experimental, odd and disturbing cinema you will definitely want to come out on Friday night.”

The Bizarre Block will take place immediately following the North American premiere of Kate Shenton’s EGOMANIAC, a witty, gory British comedy about the perils of being a female genre filmmaker in a marketplace that appreciates talking dogs more than good ideas.
​
Friday night continues with a screening of DEAD BODY, from first time director Bobbin Ramsay and producer Ian Bell. Shot with the help of crowdfunding last year, DEAD BODY can be described as FRIDAY THE 13TH meets CLUE. A game amongst a group of young friends spending the night in a cabin in the woods goes wrong when one of them starts murdering the players one by one. The night concludes with NIGHT OF SOMETHING STRANGE. Easily the most shocking movie of the PUFF program, this gross-out zombie feature from director Jonathan Straiton comes with a warning: not for those that are easily offended or weak in the stomach.

Saturday, October 8th opens with the PUFF International Oddities Shorts Program. The block showcases horror, science fiction, and more, featuring RAMIRO from Spain, THE WAY BACK from Ireland, and the sci-fi comedy PRIMITIVE TECHNOLOGY and so much more to satisfy your taste of the weird.
​
PUFF returns to its feature selections with Tim Reis’ BAD BLOOD: THE MOVIE. Funny, frenetic and colorful, BAD BLOOD is a werewolf movie with an amphibious twist -- during the full moon the source of fear isn’t wolves, but werefrogs. We’re equally excited to present WE GO ON, directed by Jesse Holland and Andy Mitton, the same talented duo who brought us YELLOWBRICKROAD in 2010. Another tense tale of psychological dread, WE GO ON stars Clark Freeman as a man whose crippling phobia of death inspires him to take out an ad offering a small fortune to the first person who can prove to him the existence of the afterlife.

“Major theater chains rarely carry independent horror movies anymore, and film festivals are becoming one of the only ways for people to see original movies outside of Netflix and Red Box” explains Co-director Alex Gardner. “This is why we are thrilled to bring the films like BAD BLOOD and WE GO ON to Philadelphia. We are also happy with the great mix of subgenres we have to offer at PUFF this year.”
​
The closing feature of PUFF is the Northeast Premiere of Japanese director Kurando Mitsutake’s wild new movie with an 80s Canon film aesthetic: KARATE KILL. Following an incredibly skilled fighter from Japan to Los Angeles to Texas on a mission to rescue his sister from a violent cult, the movie showcases incredible fight choreography while being absolutely over the top from start to finish. Reuniting the GUN WOMAN director with sexy Japanese star Asami, KARATE KILL will satiate those with an appetite for martial arts and splatter.

PUFF’s final event on Sunday, October 9 PUFF will bring the festival back to CineMug, wrapping up the weekend with a night of Philly-made local shorts.

All trailers are available on the official PUFF YouTube page (https://www.youtube.com/watch?v=TZtMUyeQD5E&list=PLo65h8LaJzWI8IMMR4WvXthQshyDNBFDO)
Posted by Steve Kopian at August 29, 2016