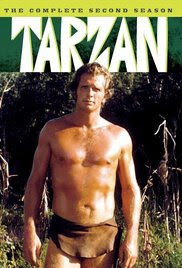 Back in February we did the entire run of Tarzan films that were spawned and connected through rights from the MGM series in the 1930’s and 40’s. The series ran from 193- to 196-. At one point during the making of the films the series paused for a couple of years as the Ron Ely Tarzan series ran. The series was supposed to star big screen Tarzan Mike Henry, but doing the films soured Henry on being Tarzan and he walked away. Ely who had been hired to play a Tarzan impostor was bumped up to lead. Recently the Decades TV Network marathoned the first season and a chunk of the second one and I found myself dropping in to a bunch of the episodes over the run.

Based on the ten or so episodes I caught during the run I think the series is absolutely a great addition to the Tarzan mythos. To be quite honest the series is a vast improvement over a good number of the later films especially the final one TARZAN AND THE JUNGLE BOY. While the series hits a good number of cliché points, Cheetah, a Boy stand in, and plots that had been used before, the series over comes the sense of been here and done that by location shooting, a well written scripts and a stunning turn by Ron Ely.

Ely cuts an iconic figure as the jungle king. Not one to shy away from danger the fact that he did his own stunts helps to sell the plots. There are no real cutaways and it makes it all real. It also helps that he carries himself in such a way that you know he’s going to kick the bad guys ass. He’s one of the best Tarzans and his performance is what sold the series for me-to the extent that I’m going to pick up the series from the Warner Archive.

I really loved what I saw and found that I kept trying to find excuses to get back to the TV to watch more.

If you need something to binge watch I highly recommend the Ron Ely Tarzan
Posted by Steve Kopian at August 27, 2016