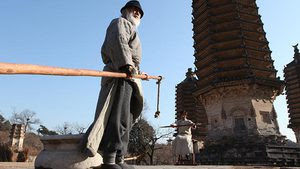 The plot has something to do with a man running away and taking the name of a man named Judge Archer who is 16th in line of men destined to act as an avenger between martial arts schools . He's hired  by a woman to avenge her.

There are lots of realistic fight, lots of long silences and not a hell of a lot to grab on to as to plot and characters. You really have to go with it or else kind of go mad. I started to fall aseep 20 minutes in and I battled to stay awake until the end. Yes it looks good, yes it has great fights, but god damn its obtuse. I simply couldn't connect.

If you loved SWORD IDENTITY give it ago, if not stay away.
Posted by Steve Kopian at August 04, 2016