Full disclosure for those who aren’t regular readers of Unseen Films Alec Kubas-Meyer is a friend and occasional contributor to Unseen Films. That said, my feeling for his film was in no way influenced by that. If anything the fact that I know him and the cast was a distraction because I saw my friends on screen. Despite that the film still knocked my socks off. If the film had been bad I would have told him so, as he will attest since we’ve had arguments about projects that I thought didn’t work. 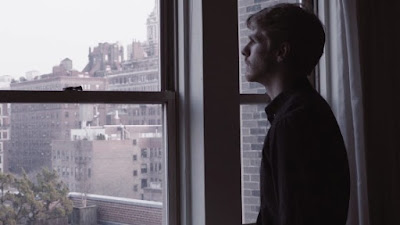 Alec Kubas-Meyer’s NOT TOO YOUNG is one of the most challenging films you’ll see- period. The film is a slap in the face and a challenge to what you think and feel or rather what you think you should think and feel. Simply put you don’t want to feel for Alec's protagonist, but you do.

The film concerns a man, played by the director, who is a a hebephile (meaning he is attracked to adolescent girls). The film charts his struggle to deal with his attractions. The film is unsensational, it just is, and it ends with a moment that is unexpected and, dare I say it, hopeful, which is going to troubling for many people.

It is a film that hangs with you. I’ve have seen it several times, the last one last night at Alec's insistence and I find I am haunted by it. It’s a film that is like sitting at fancy dinner and having the chair pulled out from under you, except that instead of crashing to the floor you go into a slow motion fall that lasts months or years as you ponder what you’ve just seen and why you feel as you do. You are  not supposed to feel this way,  but you do. I’m still waiting to crash from having the chair pulled out and having my emotions jumbled.

Alec has made a masterpiece. This isn’t a button pusher but a button stomper. He’s blown up the box on how we are supposed to feel for certain type of character and set the old notions on fire. It’s a film that some people are going to dismiss not because it’s bad but because it’s too good, he’s made a film some can’t like because a person who is “bad” finds, perhaps, a way out.

This is going to be a controversial film, and I suspect some people are not going to want to run it. or see it.  Its understandable, as much as I think its a great film, it still disturbs me.

Even allowing that Alec is friend, I have no trouble saying he is a genius. He is a filmmaker of the highest order and one you need to watch and NOT TOO YOUNG proves it in spades.

For more information and tickets to the Women Texas Film Festival go here
Posted by Steve Kopian at August 19, 2016