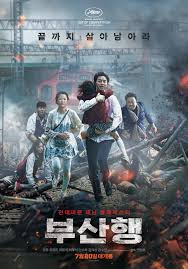 The film is the story of a hedge fund manager and largely absent father who really isn't there for his daughter. When the girl insists on going to see her mother in Busan on her birthday he agrees to take her by train.  As the train is pulling out of the station an unwell girl leaps aboard the train- unfortunately she's infected with whatever leaked from a bio lab and shes on the road to changing into a blood thirsty monster.  Soon the passengers are turning into fast  moving zombies and the passengers have no where to run.

Stunning film takes about fifteen minutes to set everything and everyone up before it just goes like a rocket straight on to the final fade out.  There are good guys, bad guys, acts of cowardice and some of heroics. You will laugh and cry (some acts of self sacrifice are moving) and generally be on the edge of your seat. 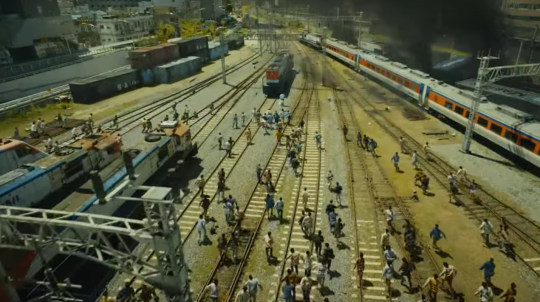 Its one of the best zombie films in years because it doesn't explain too much and just tells us exactly what the characters know. It also moves like the wind barely giving the audience any time to breath or consider what the hell is going. The film moves along at such a good clip, and is so lacking in gore (other than a bite or two) that this is really an action film with monsters

Its a film that is so good and so gripping it's been playing in a local theater for five weeks to sold out houses. Being able to say that says a great deal because most films, especially Asian films, last only a week or two and don't sell out past the first weekend. Additionally most Asian films don't spread out past the handful of AMC run theaters they start in and TRAIN TO BUSAN has.

I could say that the film is similar in some ways to other zombie films, the fast movie zombies echo WORLD WAR Z's creatures and there are slight references to the Romero films, but ultimately the film is its own thing. The rules of its monsters, quick infection, the need for them to see their prey and the seeming lack of a way to kill them are all new. Yes the film echoes other films but the film is all it's own thing...

...except that the film feels like a companion piece to the director's earlier SEOUL STATION.  I can't argue that one is the sequel to the other, because other than the zombies and the train references nothing crosses over, rather they are more two stories set at the same time with  SEOUL STATION being the first night of the infestation  and TRAIN being the next day.  There are call backs to each other, with some of the zombie insanity in the train station at the start echoing the images in the first film. TRAIN makes clear why things are happening while SEOUL its never explained. Seeing the two films together, whether its the right or wrong thing to do, make both films better and I will argue that taken  together the films make one of the best films of the year.

An absolute must see for horror, action and suspense fans. 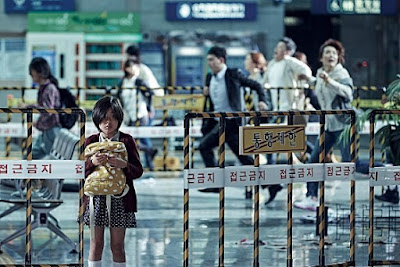