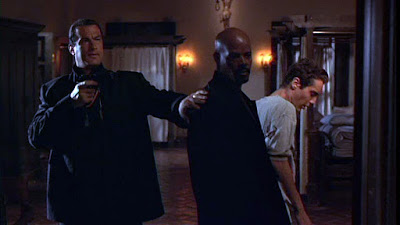 While the film is about bad guys using a serial killer as cover for their murders, the title character is actually Steven Segal, a super-secret agent now working as a cop. Back in his bad federal service days he got the name because you’d see nothing, then the glimmer of something right before you died. Segal has given that all up and has become a Buddhist homicide detective in LA. He had moved because of scandal when a suspect died in NYC. Teamed up with Keenen Ivory Wayans the pair get into trouble when they stop a hostage situation and refuse to not tell the truth. This puts them on a collision course with a bad industrialist with ties to the Russian mob.

Smart ass buddy cop action comedy where a running joke is a dried deer penis joke came at the tail end of Segal’s box office reign and it collided with Wayans failed attempt at becoming an action star (why he never clicked is beyond me because he is very good). After this Segal’s ego got in the way of his script choices and the films began to flop left and right. (Actually what I think happened was that his ego made him difficult to work with so people stopped sending him good scripts-there are all sorts of stories about his being hellaciously late for this film). When this film came out is was viewed as a nail in Segal’s screen career but watching it 20 years on it actually plays better than some of his early mega hits.

The reason the film works is that it’s the right mix of action and humor. The jokes don’t strain to be funny or clever they are the sort of thing that someone might say in the situation. Its helps keep it real. While the action is not always realistic, what Segal film is?. The action is, for the most part nicely low key until the final confrontations. Yea Segal kicks ass but it’s never really too much. The final beat down is of course over the top but it’s more as an exclamation point to the proceedings.

I really like this film a great deal. I think it works a hell of a lot better than many of Segal’s earlier films. I like the restrained action and as for the plot , it actually has one where something like OUT FOR JUSTICE doesn’t have one and MARKED FOR DEATH is a total mess with Jamaican twins as drug dealing psychos. Segal’s best films, this. ABOVE THE LAW (which was the template for several other of his films), UNDER SIEGE work because there is a real story to hang the action on. The problem is most of his films are just action bits with filler between them.

Definitely worth your time if only to remember that Steven Segal used to actually make decent films
Posted by Steve Kopian at August 20, 2016