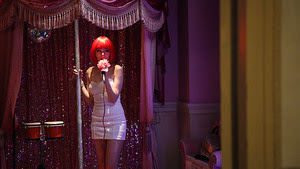 A glorious mix of genres in the way that only Korea seems to manage KARAOKE CRAZIES is wonderful little confection that will delight anyone who doesn't want the run of the mill.

The Addiction Karaoke parlor is dying. Stuck in the middle of nowhere, near a defunct factory the place is barely on life support. When in desperation the owner hires a young girl as a helper business slowly begins to pick up. She can't sing but can keep the clients happy. Another comes in who can sing and business begins to pick up to the point they hire the guy who was hiding in the store room. However things take a dark turn when the local serial killer takes notice of the place.

Stunning mix of comedy, drama, thriller and whimsy KARAOKE CRAZIES is the sort of film that refuses to be anything except what it is. I'm not sure exactly how to describe it or what to compare it to. Its not like any Western film, and only the sort of films that its home country smake which often start our funny, get deadly serious and then bounce back again with the greatest of  ease. The film reacts as if it were life. bouncing between them on a turn of a dime.

That the film works so well it's because the mix of characters is so finely drawn. These are real people and not caricatures or cardboard cut outs. Over a third of the film is done before we meet anyone other than the owner and Ha-suck the video game addicted first girl. Once their relationship is established director Kin Sang-chang simply drops in the other characters and we believe in them with no problem. Its a stunning move that makes the film work better and feel more fleshed out than you think it should.

This is a must see when it shows up near you. (probably at a festival for now since it's booked at a number)
Posted by Steve Kopian at August 03, 2016