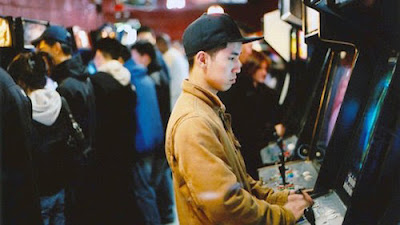 After almost a year on the festival circuit LOST ACADE is coming to theaters starting Friday, beginning at NYC's Metrograph.  Both Mr C and I saw  the film at DOC NYC last year and filed reviews.  While I liked the film, I was seeing the film as an outsider, some one who had only been there once or twice Mr C actually spent time there. To me his thoughts were more important than mine - but since he was doing a piece for his Planet Chocko he only did a short piece for Unseen which follows:

The Chinatown Fair on Mott Street was a dive of an arcade in lower Manhattan that was ultimately competing with the neon giants of gaming arcades that were propping up in Times Square. My memories of the Chinatown Fair was during the 80s-90s when it acted as a place of refuge for gaming & time away from the hustle and bustle of Chinatown while I wait for my mom to end her shift working at the sewing factory on Lafayette Street or when my Dr. Toothy dentist visit ended the grinding & clamping sessions early. What I experienced at the fair included watching a culture of passionate fighting game enthusiasts start to brew to catching wannabe Chinatown triad rebel rousers passby the arcade to take a break, or simply those just curious of the Live Tic Tac Toe playing Chicken! THE LOST ARCADE documentary brought back memories of a lost but not forgotten New York.

The piece you really want to see C's longer piece at Planet Chocko. Part essay, part review the piece explains the arcade and what it meant to people. The piece also has the Q&A that followed one of the screenings at DOCNYC. If you want to know why you should go see the film (especially at Metrograph which is a few blocks from its location, go read C's piece which can be found here.
Posted by Steve Kopian at August 09, 2016