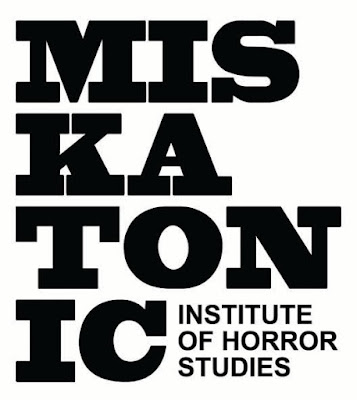 With successful branches in London and Montreal, The Miskatonic Institute of Horror Studies makes its first stateside stop at Brooklyn’s Morbid Anatomy Museum with a pilot semester of horror film, literature and pop culture classes, running from September through December 2016 and featuring classes by some of the most renowned voices in horror film, fiction and criticism.

Named for the fictional university in H.P. Lovecraft’s literary mythos, The Miskatonic Institute of Horror Studies is a community-based organization that offers university-level horror history and theory classes for people of all ages. The Miskatonic is a non-profit endeavour through which established horror writers, directors, scholars and programmers/curators celebrate horror history and culture with a unique blend of enthusiasm and critical perspective.

The semester kicks off with a “Live From Miskatonic” presentation of horror author Jack Ketchum (OFF SEASON, THE GIRL NEXT DOOR) in conversation with Miskatonic founder Kier-La Janisse, followed in October with a masterclass from Dennis Paoli (co-writer, RE-ANIMATOR, FROM BEYOND) on adapting the “unfilmable” work of our namesake, HP Lovecraft, for the screen. In November, Maitland McDonagh (BROKEN MIRRORS, BROKEN MINDS: THE DARK DREAMS OF DARIO ARGENTO) talks about the interesting cross-pollination of genre tropes and vintage gay pulp fiction, and we close out the season with longtime horror journalist Michael Gingold taking students on a trip through the New York City of horror film and television, complete with an interactive component. See below for the full class descriptions.

The Miskatonic Institute of Horror Studies was founded by film writer and programmer Kier-La Janisse in March of 2010. After existing in embryonic form at Aqua Books in Winnipeg, Canada, Miskatonic moved to Montreal’s Blue Sunshine Psychotronic Film Centre in June 2010. Since 2013 Miskatonic Montreal has been co-directed by Kristopher Woofter and Mario DeGiglio-Bellemare, while Janisse teamed up with UK-based film scholar and Electric Sheep founder/editor-in-chief Virginie Sélavy to launch Miskatonic London in January 2015 – which has gone on to enjoy lectures from the likes of genre luminaries Kim Newman, Stephen Thrower, Jasper Sharp, Mark Gatiss, John Hough, Daniel Bird and more. Miskatonic NYC is a pilot program for the fall of 2016, under the co-direction of Kier-La Janisse, Marc Walkow and Samuel Zimmerman.

Stephen King called him “the scariest guy in America.” And so we kick off Miskatonic NYC with a bang as a titan of horror fiction, Jack Ketchum (OFF SEASON, THE GIRL NEXT DOOR, THE LOST, RED) joins us for our first event at the Morbid Anatomy Museum for an in-depth look at his work and adaptations to the screen, moderated by film writer, programmer and Miskatonic Institute founder Kier-La Janisse.

Jack Ketchum is the pseudonym for a former actor, singer, teacher, literary agent, lumber salesman, and soda jerk -- a former flower child and baby boomer who figures that in 1956 Elvis, dinosaurs and horror probably saved his life. His first novel, Off Season, prompted the Village Voice to publicly scold its publisher in print for publishing violent pornography. He personally disagrees but is perfectly happy to let you decide for yourself. His short story The Box won a 1994 Bram Stoker Award from the HWA, his story Gone won again in 2000 -- and in 2003 he won Stokers for both best collection for Peaceable Kingdom and best long fiction for Closing Time. He has written eleven novels, the latest of which are Red, Ladies' Night, and The Lost. His stories are collected in The Exit At Toledo Blade Boulevard, Broken on the Wheel of Sex, and Peaceable Kingdom. His novella The Crossings was cited by Stephen King in his speech at the 2003 National Book Awards.  www.jackketchum.net

Kier-La Janisse is a film writer and programmer, Editor-in-Chief of Spectacular Optical Publications, founder of The Miskatonic Institute of Horror Studies and the Festival Director of Monster Fest in Melbourne, Australia. She is the author of A Violent Professional: The Films of Luciano Rossi (FAB Press, 2007) and House of Psychotic Women: An Autobiographical Topography of Female Neurosis in Horror and Exploitation Films (FAB Press, 2012). She recently co-edited and published the anthology books KID POWER! about kids in cult film and television and Satanic Panic: Pop-Cultural Paranoia in the 1980s. She is currently working on the book A Song From the Heart Beats the Devil Every Time about children’s programming from 1965-1985.

Dennis Paoli, screenwriter for director Stuart Gordon’s film adaptations of the works of H. P. Lovecraft (Re-Animator, From Beyond, Dagon, and for the cable television series “Masters of Horror,” Dreams in the Witch House), will lead a two-hour master class on adapting Lovecraft for the screen—the challenges, techniques, and insights into the works gained in the process. The class will also explore the collaborative nature of adaptation—the writer, in as real a sense as possible, collaborates with the original creator of the literary work—and of film-making, by nature a cooperative, if sometimes contentious, undertaking.

The enduring popularity of Gordon and Paoli’s film versions of Lovecraft’s fiction speaks to the enduring popularity of the original tales, but also to their capacity for updating, re-casting, and expanding. These specific adaptations will be examined in scenes from each of the films. Paoli will also discuss his long-time collaboration with Stuart Gordon, their methods of working together and roles in the process, based on their strengths.

Paoli, who runs writing programs and teaches Gothic Fiction at Hunter College, will also consider Lovecraft’s work in the larger context of the literary genres of horror and science fiction, the major themes and working principles of Gothic literature, and their long history of cinematic adaptation.

Dennis Paoli has written for film, TV, the stage, and the internet. His feature films include Bodysnatchers (with Stuart Gordon, for Warner Brothers), adaptations of H. P. Lovecraft's Re-Animator (with Stuart Gordon and William Norris), From Beyond (for Empire), and Dagon (for Filmax). For the stage, he wrote the one-man show Nevermore: An Evening with Edgar Allan Poe, which has been performed internationally; co-wrote the script for Re-Animator: The Musical, for which he won several LA theater awards; and co-wrote with the Organic Theater Company, the baseball comedy Bleacher Bums, which ran Off-Broadway, through three revivals in Chicago, and over seven years in Los Angeles. The television version for PBS won an Emmy, and the film version (which he co-wrote with Mitch Paradise) aired on Showtime. The HBO film The Dentist (with Stuart Gordon) and his work for Showtime’s Masters of Horror series—adaptations with Stuart Gordon of H. P. Lovecraft’s Dreams in the Witch House and Edgar Allan Poe’s The Black Cat—brought the horror genre to cable television. His adaptation of Lovecraft’s The Hound was streamed on Halloween 2015 by the genre website Tales from Beyond the Pale (talesfrombeyondthepale.com). Dennis is also an academic, a teacher and administrator at Hunter College of the City University of New York. He has taught Gothic and Irish literature and 20th century drama. He has written criticism and articles for the New York Times, the Village Voice, the Dictionary of Literary Biography, the Encyclopedia of World Literature in the 20th Century, and various volumes, periodicals, and online blogs. The most important work he does is as Donor-Advisor of The Heidi Paoli Fund, a philanthropic organization that supports cancer patients and their caregivers.

And while these books are pulp fictions through and through, they're far from unsophisticated: The teaser for Vampire's Kiss, in which a tediously ordinary, suburban wage slave chronicles his induction into the world the queer undead, wonders disingenuously whether he's "a vampire?—Or... merely rationalizing his homosexuality?" Free of the scrutiny afforded gay literary novels, gay pulps dared to be cheeky, to riff on pop culture and flirt with subversiveness: Gay Vampire gives a shout out to supernatural soap opera Dark Shadows, the thriller Man Eater to every dark tale of mirror-image cops and criminals... gay pulps shone a light under the bed, into the corner and, yes, the closets, calling out the monsters in all their fabulous freakiness.

For decades, the provinces of screen horror were European castles and villages, and Southwest/California towns and deserts—until 1968's ROSEMARY'S BABY, when terror moved into the Big Apple and never left. This class will chronicle the history of Manhattan and the surrounding boroughs in genre cinema, addressing many specific titles—from expensive studio fare to down-and-dirty independents—lensed on and under its streets, classic and recurring locations, and how the many sides of the city were explored and exploited by filmmakers. Resident auteurs such as Larry Cohen, Abel Ferrara, Frank Henenlotter and William Lustig will be addressed, as will the ways in which New York City-set scare flicks reflected the changes in the city itself over the years.

Michael Gingold has been covering the world of horror cinema since high school, when he started publishing the fanzine SCAREAPHANALIA. He spent 28 years as part of the staff of FANGORIA magazine and its website—beginning as a writer in 1988, and serving as associate editor, then managing editor and finally editor-in-chief. He is currently an editor and/or writer for RUE MORGUE, SCREAM, BIRTH.MOVIES.DEATH, DELIRIUM and Blumhouse.com. Michael has done liner notes for a number of Blu-ray and DVD releases, appeared in numerous documentaries and disc featurettes, and taken part in several DVD/Blu-ray audio commentaries. Among his screenplay credits are SHADOW: DEAD RIOT (Fever Dreams), LEECHES! (Rapid Heart Pictures) and the upcoming THE DOLL for director Dante Tomaselli. He currently hosts monthly Prints of Darkness screenings of classic horror films on 35mm at the Greater NY Alamo Drafthouse Cinema.
Posted by Steve Kopian at August 31, 2016