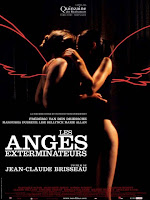 This is a fictionalized story based on the preparation the director went through making his previous film, Secret Things (which of course you know since you read yesterdays post...you did read yesterday's post?)

I'm not sure what its all about or what the point was but I really enjoyed it both times I've seen it now.

This is a a funny sexy off kilter film with spirits and apparitions wandering through it (where they came from or what they are doing isn't really explained, but at the same time it completely makes sense). As you can tell from the description, and from the warning that this film is full of nudity and one that his is plainly adult viewing. For me the sex and nudity is not what important to the film being adult, it's that there are grown up ideas floating around. There is a wonderful real intelligence behind the camera make this a film I like a great deal. There is a realness of a sort to it all (even with the ghosts) that I don't usually find in a film with frank sexual discussions, though I would love any women to tell me how true the feelings of the women in this film are.

Worth a look for after you put the kids to bed.

Currently out on DVD.
Posted by Steve Kopian at October 17, 2010