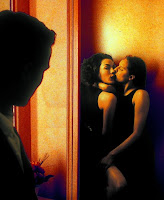 This weekend a film and a film about the making of the film made by the same director...

Two women who work at a bar decide to use sex to get what they want from life. While they become very successful, things also end up taking a turn or two that they didn't expect.

I liked this very adult movie very much. This is a very sexy movie with some very likable women as the leads. The prospect of using sex as a means to an end is of course a way of life for many people, both male and female, and here we see it in action.

Watching it I was surprised by how the film didn't go in the directions I thought it would and was pleased that it wasn't this dark noirish tale that cover art seemed to imply. Actually as I was watching the film I was struck by how much this film reminded me of Exterminating Angels, another off beat, but in a good way, French film about a director trying to get the right women to perform sexually for a film he was doing. When I checked IMDB after watching Secret Things I found that the director for both films was the same and that the process of making Secret Things was the inspiration for Exterminating Angels.

I can't wait to have a double feature. A great deal of nudity and sexual activity, so keep this away from the kids. Recommended.

(By the way Exterminating Angels is tomorrows film)
Posted by Steve Kopian at October 16, 2010