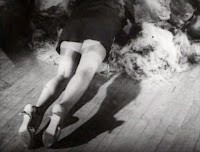 This week we go in the opposite direction of what this blog is all about. This week we're pointing out films so awful so horrible that they should remain unseen. These are the rabid dogs of the film world, the ones we feel should be shot down where they stand so that the world is safe for film going. These are some of the refuse films that we've had to sit through in order to put a website of lost gems together.

We're gonna start slow and work up to real vitriol during the course of the week. First up Creeping Terror a film about which one can only say a few things, mostly burn the film.

Damn near unwatchable bad film, rightly hailed as one of the worst (as in unwatchable under any circumstances) film, concerns a giant worm like carpet monster with a mouth that looks like genitalia.

Awful in ways that only home movies are this film is one of the worst films of all time and something that even bad movie lovers don't need to experience. I've done so a couple of times and have regretted it every time. Frankly I'd rather chew on tin foil and shave my head with a cheese grater rather than see this again.

As someone who's plumbed the depth of bad movies this really is near the bottom. From the bad music, post dubbed sequences and narration (the soundtrack was lost or never created depending upon the story), poor acting, bad monster suits (one was created which went missing when the producers didn't pay for it so they had to make another which didn't really look like the first), bad acting (yes I know I mentioned acting twice) and tons of mismatched footage(A US rocket is seen to land-it's the monsters ship- but it doesn't match the ship on the ground), this is an inept as they come.

Trust me you don't want to see this, you will not enjoy it in any sort of bad movie MST3K sort of way (even friends and lots of drinks won't help).

Its just awful. Avoid it, and if you don't, don't say I didn't warn you.

For those into self abuse the film is available on DVD.
Posted by Steve Kopian at October 25, 2010