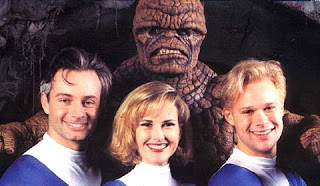 For the next ten days Unseen Films is going to the funny pages. In honor of the weird occurrence of two back to back comic conventions in New York (today is Wizard World’s Big Apple Convention, and next weekend is New York Comic Con and the New York Anime Festival), we’re going to do ten days of films that came from comic strips and comic books. I’m going to begin with the Fantastic Four.

This is not the big budget version that starred Michael Chiklis and Jessica Alba, this is the version that was made in 1994 and was never released. Seriously, the film was never released to theaters, because the point of making the film wasn’t to make a movie for release; rather it was to make a movie that fulfilled the terms of the contract that gave the producer the rights to make a screen adaption. The rights were about to go away when Hollywood and Chris Columbus went knocking on Marvel Comics' door. If a movie wasn’t made by a certain date, the rights to the characters would revert to Marvel. So the rights holder hooked up with Roger Corman and produced a quickie film. A nominal release was planned, promotional articles were written, and I know that Alex Hyde White (the actor portraying Reed Richards, leader of the Fantastic Four) was due to appear at comic book store Jim Hanley’s Universe in Manhattan to promote the film (I was planning on attending the in-store). Just before White's appearance, word reached him, and the world, that the release was cancelled and that the film was to be buried because the producers didn't want to release it; the film only had to be made, not released, for the rights to remain in the producer's hands.

No one was ever supposed to see the film, yet somehow it escaped onto the collector's market. I have no idea why no home video was ever attempted; even after the two recent big screen adaptions, this film simply is still buried.

I find its premature burial kind of sad because most of the movie is actually a pretty good comic adaptation.

The film basically covers the origin of the superhero group and of the masked Dr. Doom, starting with their time in college and going onward from there. The scenes with the Fantastic Four and Doom are wonderful. In all honesty most of it plays better than the big budget things that Hollywood cranked out. Sure the special effects are low rent and bordering on not so special, but at the same time they are part of a film that has heart. If you watch the film it's clear that everyone actually cared about what they were doing.

The story runs parallel with the story of a gnomish guy who lives in the sewers and loves jewels. He gets his hands on some space jewel that's important to the FF and Doom, but for the most part his story is kept separate from the superhero stuff (bear with me I'm doing this from memory). The scenes with this pint sized character are really, really bad. They're so bad that when I do watch the film I scan through those parts of it and just concentrate on the heroes.

Yes I know this film has a bad reputation, and on some level it kind of deserves it. On the other hand think about it, if the film was truly as awful as everyone says it is, why would it still be circulated and talked about twenty years after it was made and never released? It just doesn't make sense.

No it's not even close to being one of the greatest films, or even greatest superhero films, ever made. It's just a nice little film that has unfairly gotten shunted on the road toward oblivion.

It's a film that is worth taking the time to see (allowing you know it has limitations).